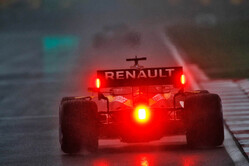 Renault DP World F1 Team will line up with both cars inside the top ten for tomorrow's Turkish Grand Prix after Daniel Ricciardo qualified fifth and Esteban Ocon seventh at Istanbul Park in wet conditions.

It was a welcome return to reaching Q3 with both cars in Turkey, but it was a far from straightforward qualifying after three turbulent sessions.

Both drivers began Q1 on full Wet tyres with Esteban near the peak of the timesheets after getting to grips with the conditions quickly. Daniel too was running inside the top ten after his opening efforts. Esteban went quickest of all drivers in Q1 until the session was red flagged due to the heavy rain and worsening conditions.

After a lengthy delay, Daniel improved his lap time to move up to seventh with Esteban not finding any extra lap time to go through to Q2 in eighth.

The track remained very wet for the second part of qualifying with both drivers on Wets and remaining out on track for the duration of the session on that tyre. The leaderboard changed throughout with Daniel and Esteban taking turns in and out of the top ten. In the end, both drivers were safely through to Q3: Daniel in tenth, 0.6secs from the drop and Esteban in sixth.

For Q3, Esteban began his session on Intermediates with all but one other driver - including Daniel - opting for Wets. With bringing the tyre temperatures up to the optimum operating window proving difficult, Esteban reverted to Wets where his one single push lap proved good enough for seventh on the grid. Daniel was improving lap by lap to claim fifth place; ensuring both drivers will begin tomorrow's race - at 13:10 local time - on the clean side of the grid.

Daniel Ricciardo: "I thought yesterday was unique but today was something else! It was by far the slipperiest conditions we've ever experienced in Formula 1. It was so unpredictable, and I would compare it to driving on a skid pan. There was no sign as to where the grip was in the corners, and I wasn't getting much feedback from the track either. I didn't go all guns blazing in Q1, and I kept chipping away at it throughout Q2 and Q3 and to end fifth at the chequered flag is a decent result. It's so much more taxing mentally when conditions are like this. I'm pretty sure I wasn't blinking during a lap. It'll be an interesting race tomorrow regardless if it's wet or dry."

Esteban Ocon: "It was pretty tricky out there in very slippery conditions. It was maybe the most slippery conditions I've ever driven, but it's the same for everyone and we tried to get the maximum out of the car. I felt we did well in Q1 and Q2, but not quite so good in Q3. We probably made the wrong decision to run Intermediates at the start instead of Wets as I felt we could have been in the top five. It was a good lap for seventh, but it was my only push lap on that set, so maybe with a few more laps, I could have been up there. There will be plenty of opportunities tomorrow. We don't know about the weather yet, so let's see."

Alan Permane, Sporting Director: "We're happy with today's qualifying session with both drivers inside the top ten. It's never easy in these conditions and I think especially when it's on the cusp of choosing between full Wet tyres or Intermediate tyres; it's does make the strategy very tricky. We tried Intermediates with Esteban in Q3 and he couldn't seem to make them work so we reverted him back to the full Wet. We're pleased with the day and we look forward to a good race tomorrow, whether it's wet or dry."