Mercedes rules on an eventful final day in Barcelona 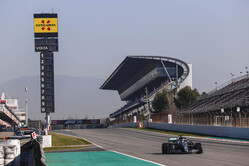 Depending on whether you are a Mercedes fanatic - we don't know what the German equivalent of tifosi might be - or one of those glass half full or empty types, today's running has either sent you into the weekend with a broad grin on your face or left you wondering how else you might spend your weekends this year.

Fact is, on the evidence thus far, for Mercedes it is very much business as usual.

"It's been a great effort from the team and great to see that the reliability is as strong as it is," said Hamilton. "The car has felt pretty good out there. It's been a solid first week and we've got some good mileage. It's a true showing of all the incredible work everyone has done back at the factory and here at the track. I'm really proud of everyone. We've got to keep working hard, analyse all the data from this week and figure out how we can move the car forward and build on everything next week."

"It's been really fun today," added Bottas, "especially getting to do some shorter runs and being able to push the car a little bit closer to the limits - seeing a little bit more of the performance of the car. I enjoyed it and it felt really good out there. It feels like we made a step with the set-up since yesterday.

"The car is very driveable and I'm sure with some more hard work next week, we can make it better, which will be the goal. Overall, it's been a really good first test, we have made some improvements every day with the car. A big well done to every single team member to deliver the car and engine - great job! I'm looking forward to getting back in the car next week."

True, Red Bull has yet to fully show its hand, but unless the Milton Keynes outfit has something very impressive up its sleeve it is difficult to see Max or Alex consistently challenging the Silver Arrows this season.

As for Ferrari... if Mattia Binotto is already feeling less optimistic than last year, what hope the rest of us.

As testing gradually moved out of the FP1/FP2 phase into FP3, the pressure accordingly took its toll, and while the only red flag of the opening two days running was down to Kimi deliberately running out of fuel, today the session was stopped on no less than four occasions.

First we has Sebastian Vettel stopping on track with an engine issue that necessitated a power unit change, then Nicholas Latifi also suffered an engine issue. Less than half-an-hour into this afternoon's running Kevin Magnussen went off and clouted the barriers, with Daniel Ricciardo bringing the session to a halt again with just over an hour remaining.

Add to this an issue which saw Lando Norris miss vital track time this afternoon, and Max Verstappen similarly sidelined after running over the sausage kerbs this morning, and you can see that as the pace began to ramp up so too did the chance for things to go wrong.

For a team already the subject of much speculation regarding its future, today was the worst possible scenario for Haas. After just 4 laps, Magnussen suffered a puncture in T7 which caused him to spin and clout the wall at T8.

"We had an issue with the wheel spacer," revealed Guenther Steiner, "which then resulted in the wheel touching inside and deflating.

"Not a good end to our testing; we can live with that," he added. "It takes too long to fix and we will now prepare for next week. These things happen, they shouldn't, and that's racing."

All well and good, but when one considers that Romain Grosjean had a similar off yesterday, one has to wonder if Haas is still suffering handling issues.

"Overall, testing's been positive for us this week," insisted Magnussen. "We've had two and a half days of good solid running with everything looking as to our expectations - I'm very happy about that.

"I'm looking forward to next week and getting into some more performance running and pushing the car a little bit harder. We'll work on more set-up and so on as well. As I said though, I'm happy with this week."

Despite the engine problem that left him a spectator for several hours, Sebastian Vettel completed a fair number of laps in the afternoon. However, there was no running on softs, and - Mattia Binotto's comments aside - one has to say that the Maranello outfit hasn't impressed this week.

"We adopted a radically different approach to this first test compared to last year's," said Mattia Binotto. "So far, we have concentrated on evaluating every aspect of the car's potential, running several different configurations, both aero and mechanical, so as to gather as much data as possible.

"We will now go home and analyse it all, comparing it to that gathered in the simulations we ran on the computer and on the actual simulator we have in Maranello.

"In next week's test, we will begin to investigate the performance side, working on set-up and moving forward with the usual tests in qualifying and race trim in order to be well prepared for the opening round in Australia."

Like Ferrari, Red Bull opted not to run the red-banded rubber, and while both Max Verstappen and Alex Albon appear happy with the car, it shows no signs as yet of causing Toto Wolff too many sleepless nights.

"We got another good amount of laps today and for this first week of testing that's really important as we try to understand the new car," said Verstappen. "We're not chasing lap time; it's not about that. It's about scanning and testing everything on the car, making sure everything works well and that it's reliable. It's been really positive and the car has felt good all week. We still have a lot of things to learn on the car and that will continue next week, but at the end of this first test I'm happy and can't complain."

"This week we were focused more on reliability and systems checks than anything else and everything went very smoothly," added Albon. "The car feels good and each time we went out it felt better and better. It's all about gaining experience of the car, learning what we can do with it and getting ready for Melbourne. The main areas we needed to work on have definitely improved.

"I think we're looking strong and compared to last year we've made a good step forward. I think we've hit the ground running and we have a very good baseline now for next week."

Esteban Ocon was third quickest today, with teammate Ricciardo seventh. However, looking at the two drivers there is the feeling that neither is particularly at ease with the car.

Though Antonio Giovinazzi completed a massive 152 laps in the Alfa Romeo there is a question mark over the car's pace. That said, Kimi Raikkonen was impressive yesterday, so perhaps we're being over sceptical.

"I am pretty satisfied with our work, both today and in the whole of the week," said Giovinazzi. "The first outings in a new car are a very exciting moment but you can't really take your eyes off the main objective, which is to get good mileage and give the team the feedback they need. We were able to run without issues and that's the main thing. For me, every new lap, every new run means getting more confidence with the new car: I am looking forward to more of this feeling next week."

Racing Point continues to look the dark - if not prancing - horse, Lance Stroll competing 116 laps without any significant incidents. Indeed, there is already talk of the Mercedes-influenced RP20 giving Ferrari a run for its money.

"After driving in the afternoon of the opening day, it felt good to be back behind the wheel for a full day of running," said Stroll. "We covered lots of laps, collected the data and worked through the job list.

"The RP20 feels very different to last season's car and I think we're in a much better place now than we were this time last year. You never know what the others are doing so we are just focussing on our own work. We definitely have a good base on which to build."

Further signalling the fact that the midfield is where we can expect the action to be again this year, Daniil Kvyat and Pierre Gasly both put in a solid day's work as Honda added another 290 laps to its tally.

"I think today felt quite short," said Kvyat, "it was only half a day, but it was productive as we squeezed the most out of it. We had a lot of high-quality tests and tried to cover as many laps as we could, so we did well in that respect. Now we need to analyse everything and work on more tests to be ready for next week.

"The car feels like it's in the ballpark and we're still fine-tuning it like everyone else is, but the initial feeling is we've made some progress compared to last year. It's hard to say how much or if it's enough, but we're still trying to unlock the full potential of the car, both on short and long runs."

"It was a really positive afternoon," added Gasly, "I had a few more laps in the car and completed some more tests. We managed to do all of our long run programme. Unfortunately, we had a small delay toward the end of the day which meant we couldn't finish our performance runs, but it wasn't too big of an issue as it was already covered by Daniil in the morning session. All in all, it was a positive three days for the team, there are a lot of things to analyse for next week, so we can find even more performance."