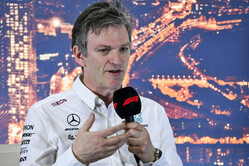 The teams reflect as the second day of pre-season testing comes to an end.

The Mercedes W11 managed just under 800 kilometres of running on day two of pre-season testing at the Circuit de Barcelona-Catalunya, with Lewis and Valtteri splitting driving duties.

Lewis was behind the wheel in the morning and focused on a variety of different systems checks, alongside long runs featuring live pit stops. Valtteri jumped into the cockpit for the afternoon, also concentrating on systems checks and a race simulation, before an electrical problem brought his session to a slightly early end.

Lewis Hamilton: It's been another beautiful day here in Barcelona and we got some great mileage on the new car today. As a team, we completed a race run in the morning, which is great for reliability and shows the foundation we are starting on. This is probably the first day ever, that I can remember, where I finished a test session and wanted to continue. We had 20 minutes left and I wanted us to maximise and do more laps, but we'd ran out of tyres. It felt good today and I felt physically fantastic. To get through a race run and still feel at the end of it that I could do another 100 laps is a good feeling.

Valtteri Bottas: We completed 77 laps this afternoon, which is a good number. But obviously running was cut short because of an issue, which made the day a bit trickier. It was a good day of learning more about the car. We got some good mileage in and I almost completed a full race simulation. So, there was a lot of good experience gained from that and lots of data for us to investigate ahead of tomorrow. For me, personally, there are many learnings to take away from that race simulation and look into further. The car felt good and I'm looking forward to continuing the running tomorrow morning, hopefully we will have a clean day.

James Allison: We are all a little disappointed to have taken an early bath today, but we console ourselves with the fact that the problem we encountered will quickly be resolved and we managed a healthy 183 laps before encountering it. That is, after all, why we go testing. It's encouraging to see that, for the second day running, the car felt honest, good and reasonably speedy. Lewis' race simulation in the morning was tidy and Valtteri's, until it was interrupted, was on a good trajectory. We also had an interesting day activating the DAS system for the first time and we are on a voyage of discovery with the drivers to learn about the system and see what it can bring us for the season ahead. We're now looking forward to the final day of the first test tomorrow and continuing to work through the tasks we have to clear before Melbourne.

As planned, Charles was first in the cockpit, working on suspension configuration, gathering more data and generally improving the team's understanding of the SF1000. The Monegasque driver ran the C2 and C3 compound tyres. Leclerc thus rounded off his first test of the year with 49 laps, which added to the 132 he did yesterday, meant he totalled 181, or 843 kilometres, which is pretty near to three Grand Prix distances.

Watching proceedings here today were Charles' younger brother Arthur and the Swede Dino Beganovic, who both joined the Ferrari Driver Academy back in January, thus following the same schooling that led to Charles becoming a Formula 1 driver.

During the lunch break, the mechanics reconfigured the car to Sebastian's driving settings and the German's sixth season on track with Scuderia Ferrari got underway shortly after 2pm. Due to drive yesterday, he swapped with Charles as he was feeling slightly unwell. Today, he carried on where his team-mate left off in the morning, also running the C4 compound, with which he set his fastest lap of 1:18.154. He did 73 laps, equal to 340 kilometres. In total, the SF1000 has now completed 254 laps, equivalent to 1,182 kilometres.

Friday is the third and final day of the first pre-season test and Sebastian will be at the wheel of the SF1000 for the whole day.

Sebastian Vettel: "Finally I was able to drive the SF1000 after feeling unwell and having to spend most of yesterday in bed. It was nice to be back behind the wheel and to start getting used to the car.

"This first half day was definitely positive: we had no reliability problems and we were able to do 73 laps. That's the most important thing when you're dealing with a new car. The SF1000 is certainly a step forward compared to last year's car.

"For tomorrow, the aim is to get as much track time as possible and to gather as much data as we can, to help us get a better understanding of where we are in our work programme."

Alex Albon: "It was a good first day with the RB16. After Max's running yesterday we carried on the work today and tried a few things that he tried. Comments wise we were very similar which is always positive. We lost some time in the middle of the day due to an investigation on the power unit but other than that it was pretty smooth. Over the winter we have addressed some of the areas where we felt we were struggling and I felt pretty comfortable in the car straight away. It's always nice to get back in the car and you always feel it on your first day back but it was good out there and the car is feeling strong."

Head of Race Engineering Guillaume Rocquelin: "We had another very productive day with the RB16 today and although we didn't complete quite as many laps as yesterday, we once again got through all of the test items on the list. We did have a small issue just before lunch when the Honda guys noticed something in the data and we therefore elected to perform a precautionary engine change. They've done a thorough check and there are no problems, so the original PU will be back in the car tomorrow. We also have a change to our usual plan tomorrow in that due to the large amount of laps being run and the compressed nature of these tests, we'll be splitting driver duties. Max will be out in the morning and Alex in the afternoon. All going to plan, it will be another extremely busy day and hopefully a productive one."

Lando Norris: "A good day - we did 137 laps, completing almost everything we wanted to do. I got a good feeling for the car, and it's not too different to last year in terms of handling, which is a good thing. We got through our programme with a lot learned for both me and the team, making a good start ahead of tomorrow and next week. There are areas we know we need to improve on, but it's been a productive day overall, which is the main thing."

James Key, Technical Director: "Another productive day today with Lando covering 137 laps. The morning was taken up with some specific aero measurements, which will give us the first proper overview of the car's aero flow conditions. We then moved on to a set programme of test items, some of them with new parts. We did long runs in the afternoon combined with some mechanical set-up work and reliability tests. We also completed some general set-up work that has helped us further understand the car, in addition to what we learned yesterday with Carlos.

"Tomorrow we'll continue the programme with both drivers, running some more new components and taking the direction we've learned over the last two days."

Pierre Gasly: "I was happy with today, I missed being behind the wheel a lot! The target was to do as many laps as we could, because with pre-season testing two days shorter this year, we have to try to be more efficient and cover more things. Overall, we can be pleased as we managed to complete the programme we set for the day and I felt comfortable in the car straight away. We tested a few more things compared to last year, also on my side in terms of driving, to understand how to get on top of everything, and there were some really positive results. There are many areas we are still exploring, we still need to figure certain areas out as it's a new car with new parts. I think we found some good directions for the next few days, so now we have quite a lot to study."

Jody Egginton (Technical Director): "The first proper day of running for Pierre went quite well overall. We covered a good number of test items together with some aero data collection with the rakes fitted and the normal systems and PU setting adjustments. The reliability of the car was again very good with a lot of kilometres completed, allowing us to tick all the boxes on the programme. We have taken a further step in our understanding of the car and will be putting this data to good use in the coming days, both here in Barcelona and also back in Faenza and Bicester where the aero, design, and vehicle performance groups are flat out preparing numerous developments for evaluation."

Toyoharu Tanabe (Honda F1 Technical Director): "For the second day of testing, our work followed on from what we did yesterday, with functionality checks as well as beginning to work on optimising our PU settings based on yesterday's feedback and data. Pierre did 147 laps, the second highest number on the day. Overall another solid day's work with plenty more data to study."