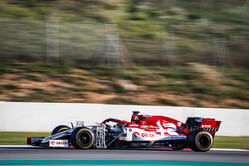 In less than thirty minutes this afternoon, veteran Kimi Raikkonen went from hero to zero, when, having posted the fastest time of the day, he subsequently caused the first red flag of pre-season testing.

Up until the moment the Finn stopped out on track having allegedly intentionally run out of fuel, though there had been a few near misses we looked to be heading for a second day of uninterrupted running.

While Pierre Gasly had spun earlier in the day, and Valtteri Bottas subsequently blotted his copybook with a spin also, the closest we had come to a red flag was when Romain Grosjean lost it in Turn 5 and clouted the barriers. However, despite damaging his rear wing, which brought his day to an early end, he was able to continue back to the pits without the need for the session to be halted.

Shortly after, Lando Norris and Esteban Ocon appeared to trip over one another but without any damage done.

Raikkonen's best time was posted on the softest C5 rubber, but even so it was marginally off the best time posted by Lewis Hamilton yesterday on the C2s.

While the new rules dictate that teams are not allowed to use barriers to prevent fans looking in, this doesn't apply if significant changes are being carried out which might prove useful to spying eyes employed by rivals. Unfortunately, while Ferrari continued its practice of forming a human shield, Red Bull, Renault and Williams each spent a fair amount of time with the shutters down.

Over the course of the session Raikkonen completed 134 laps, on a day the thirteen drivers on duty completed 1,369 laps - 11 more than yesterday.

"For my first testing day, it was an ok one," said the Finn. "The important thing is that everything seems to be working well, with no major issues. The immediate feeling is pretty positive, but it's still early days. There is still a long way to go but I think we made a step forward compared to last year: who knows where this is going to take us, but so far so good."

As debate continued over the similarity between the Racing Point and the 2019 Mercedes, Sergio Perez added another 145 laps to the RP20's tally, having set the pace for much of the day.

"Today we were able to complete a lot of kilometres - over 650 - which has been our first priority, given the limited amount of testing," said the Mexican. "We still have plenty of things to work on over the coming days but we have shown that we're on the right track with good pace and reliability.

"Hopefully tomorrow is another good day for the team with Lance in the car as our preparations for Australia continue.

"It's still very early days - far too early - but I think it's a solid base and I think we have something to work with for the coming races and for the start of the season."

Like Mercedes and Ferrari, Renault had two drivers on duty, but between them Daniel Ricciardo and Esteban Ocon could only manage 92 laps.

As was the case with his teammate yesterday, Alex Albon had a fairly anonymous day, keeping his head down and completing 132 laps, which, when added to Pierre Gasly's 146, brings Honda's total up to 562 for the two days.

"After Max's running yesterday we carried on the work today and tried a few things that he tried," said Albon. "Comments wise we were very similar which is always positive.

"We lost some time in the middle of the day due to an investigation on the power unit but other than that it was pretty smooth," he added. "Over the winter we have addressed some of the areas where we felt we were struggling and I felt pretty comfortable in the car straight away.

"It's always nice to get back in the car and you always feel it on your first day back but it was good out there and the car is feeling strong."

"The target was to do as many laps as we could," said Gasly, "because with pre-season testing two days shorter this year, we have to try to be more efficient and cover more things.

"Overall, we can be pleased," he continued, "as we managed to complete the programme we set for the day and I felt comfortable in the car straight away.

"We tested a few more things compared to last year, also on my side in terms of driving, to understand how to get on top of everything, and there were some really positive results.

"There are many areas we are still exploring, we still need to figure certain areas out as it's a new car with new parts. I think we found some good directions for the next few days, so now we have quite a lot to study."

Yet to play its hand, Ferrari had Charles Leclerc on duty this morning before Sebastian Vettel took over for the afternoon. The four-time world champion completed 72 laps on his way to posting the sixth best time of the day, worryingly on the C4 compound.

"Finally I was able to drive the SF1000 after feeling unwell and having to spend most of yesterday in bed," said the German. "It was nice to be back behind the wheel and to start getting used to the car.

"This first half day was definitely positive: we had no reliability problems and we were able to do 73 laps. That's the most important thing when you're dealing with a new car. The SF1000 is certainly a step forward compared to last year's car.

"For tomorrow, the aim is to get as much track time as possible and to gather as much data as we can, to help us get a better understanding of where we are in our work programme."

Williams' revival continued with George Russell completing 116 laps, and though the FW43 was one of several cars that spent more time in their garage than their teams might have liked, the mood within the Grove outfit appears genuinely positive.

"It was a productive day," said Russell. "We have tested a lot of aero items to understand if everything correlates in the wind tunnel and CFD.

"We spent this morning doing a lot of rake running, which is beneficial for the short term and productive in the long run.

"We had an issue over lunch which delayed our running this afternoon," he revealed, "and although everything did not go to plan, it was still productive, and this is what winter testing is all about. We will keep pushing to get the most out of these six days of testing."

While Mercedes might have wanted to go about its business quietly today, that on-board footage which revealed DAS (dual axis steering) to the watching world turned the German team's day on its head, and though the German team ominously added another 183 laps to its tally, it was the on-board footage that grabbed all the attention.

While Lewis Hamilton ended his session shortly before the lunch break after running out of tyres, the premature end to Valtteri Bottas' afternoon appeared to be due to an electrics issue. Indeed, in the moments before Raikkonen's red flag the TV cameras picked up on the Mercedes crew standing in the garage with the car safely cordoned off.

"We got some great mileage on the new car today," said Hamilton. "As a team, we completed a race run in the morning, which is great for reliability and shows the foundation we are starting on.

"This is probably the first day ever, that I can remember, where I finished a test session and wanted to continue," he admitted. "We had 20 minutes left and I wanted us to maximise and do more laps, but we'd ran out of tyres.

"It felt good today and I felt physically fantastic. To get through a race run and still feel at the end of it that I could do another 100 laps is a good feeling."

"Running was cut short because of an issue, which made the day a bit trickier," added Bottas. "It was a good day of learning more about the car. We got some good mileage in and I almost completed a full race simulation. So, there was a lot of good experience gained from that and lots of data for us to investigate ahead of tomorrow.

"For me, personally, there are many learnings to take away from that race simulation and look into further. The car felt good and I'm looking forward to continuing the running tomorrow morning, hopefully we will have a clean day."