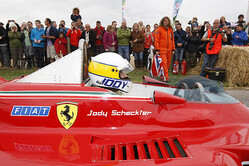 Formula 1, together with Heineken, has announced the sport's return to South Africa with an immersive fan festival.

The Festival will give fans the opportunity to see 2019 world championship runner-up Valtteri Bottas and David Coulthard tear through the streets of Sandton as they bring F1 atmosphere to the heart of the city.

The exhibition will be a must-see for Gauteng and all African F1 fans, who will be immersed into the world of F1, as Mercedes, Red Bull and Renault F1 teams roar above the reef at Africa's first-ever F1 festival.

The day will feature fun-filled activities catering for all, including a fan zone featuring interactive activations such as the 'DHL esports Challenge' and the 'Pirelli Pit-Stop' Challenge along with car displays including supercars, SA Karting, F1600 and historic single seaters.

Formula 1 legend and 1979 world championship winner, Jody Scheckter will also make a rare appearance in his 1979 title-clinching Ferrari as F1 marks its return to South Africa.

The festival will be broadcast live on SuperSport and will feature live track activity starting at 1:30pm with the main F1 Live car run commencing at 3:30pm. From 5pm, Festival-goers will be treated to live music, with the festival closing at 8pm.

"South Africa has a very special place in Formula 1 history," said Ellie Norman, Director of Marketing & Communications, "and we remain committed to returning to South Africa in the future. The festival will be an incredible opportunity for the people of Johannesburg to see F1 up close and personal, with live car runs, fan experiences and incredible live music acts."

"Heineken has a long-term association with Formula 1 globally," added Gerrit Van Loo, Heineken South Africa Managing Director. "In true Heineken style we aim to show the world how F1 is more than a race. We are thus immensely excited to utilize our global partnership with F1 to help bring this once in a lifetime event, the Heineken F1 Joburg Festival, to the people of Mzansi."

"I am very excited to be involved in what promises to be an amazing spectacle on the streets of Joburg," said Jody Scheckter, President of South African GP, "South Africa has a long history with F1 and the Festival will provide a chance for fans to get up, close and personal with the sport."

"Gauteng is undoubtedly Africa's entertainment, lifestyle and business capital," added Morkane Mosupye, Gauteng MEC for Economic Development. "It is the home of champions and an aspiring motor city region. The hosting of this first ever African F1 Festival on our shores bodes well with our provincial drive to use the hosting of quality business, sporting and lifestyle events as a catalyst for socio-economic growth, job creation and destination marketing efforts to grow Gauteng together."