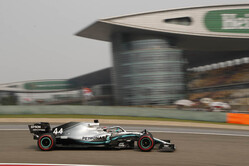 While the promoter of the Chinese Grand Prix considers whether to cancel the event in light of the coronavirus, the deadline is rapidly approaching by which time the sport will have to take action.

Following the Shanghai Sports Federation's statement advising that all planned events in the city should be suspended, F1 is essentially in limbo as it awaits a decision from the race promoter who has the final say.

F1 managing director, Ross Brawn has confirmed that the deadline by which time the sport must take action is fast approaching, while officials are looking at ways the event might be rescheduled.

"There's two logistical deadlines," said the Briton. "One is when all the sea freight goes which is this week, or next week. So things like fuel and so on go on a ship. But that's not disastrous if that shifts and has to be brought back.

"Then we get into the physically putting people over there," he continued. "That's a big challenge with people going there to prepare for the race. That's a critical stage. And that will happen in two or three week's time. I think that's the point at which really you have to say what the situation is.

"If there is a probability it doesn't happen in April, it will be postponed," he admitted. "We will leave open the opportunity to see if the race can run later in the year. China is an enthusiastic, growing market. So we'd like to have a race in China."

Dismissing media reports that the race could change places with another, he said: "We probably wouldn't do that, we will just try to find a window of when the race could happen towards the end of the year."

Finding that window is easier said than done however, for having essentially said 'never again' following the triple-header of 2018, it would be difficult to reschedule the Shanghai race into a slot that wouldn't involve four or even five consecutive race weekends.

The proposal of holding the race during the mandatory summer break was rejected by the teams at a meeting of the Strategy Group, as was the suggestion to hold the event in between the Brazilian and Abu Dhabi Grands Prix.

"It looks very difficult," he admitted. "We're waiting for the Chinese promoter and authorities to make the final decision, which I think they will. They have cancelled all the public events in March. So no public sporting events or activities. It is a tragic and very difficult situation. I think it'll become clear in the next week or two what's going to happen."

To date the coronavirus is understood to have killed over 560 people, with over 28,000 infected.