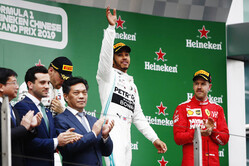 Last week, following weeks of speculation, Formula One Management announced that the forthcoming Chinese Grand Prix has been postponed due to the coronavirus.

Currently officials are looking into whether the race can be rescheduled, but an already tightly-packed calendar is making this look increasingly unlikely. Other than the fact that there are no immediate 'slots' on the calendar, the fact is that the virus has yet to peak and it is not known when the all-clear might be given.

All of which is bad news for F1, for CityAM reveals that company documents state that "cancellation of large-scale public events by a competent authority due to… outbreak of disease… could result in the loss of revenue under Formula 1's commercial contracts."

In such circumstances, the authorities have the power to issue force majeure certificates which absolve companies of their contractual obligations if this is down to unforeseeable circumstances. Indeed, the Chinese government has already begun issuing such certificates.

F1 company documents state that "if the cancellation of an Event is due to a force majeure event… the race promoter is not required to pay Formula 1 the race promotion fee for that Event."

While F1 will not say whether the coronavirus outbreak constitutes a force majeure event in its contract for the Shanghai race, Charles Braithwaite, a partner at law firm Collyer Bristow, is in no doubt.

"It would be pretty common to include outbreak of disease or similar such wording," he says. "Even if there wasn't such a clear reference, it is pretty common for a definition of force majeure to include anything beyond the reasonable control of the relevant party – which would likely be deemed to include the coronavirus or at least the decision of the Chinese authorities to cancel the race because of the coronavirus."

However, the matter is further complicated by the fact that event organiser, Juss Sports Group, has already paid the $33m (£25m) hosting fee, as company documents state that fees for long-haul races "typically fall due three months before the relevant Event."

Consequently, if F1 refuses to refund the money, or disease is excluded from the contract, but the authorities still claim a case of force majeure, the matter would go to court.

However, with F1 having previously admitted that it hopes to stage a second event in China, arguably the world's fastest-growing economy, it remains to be seen if the sport's owners really want to go head-to-head or simply take the hit.