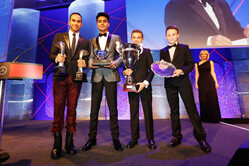 His infamous "slum" claim aside, Lewis Hamilton has never forgotten his modest roots.

Though picked up by McLaren at an early age, following the youngster's audacious comment to Ron Dennis, it was Lewis' father, Anthony Hamilton who had done the all-important groundwork, holding down several jobs as he sought to give his son that vital first step up the motor sport ladder.

"My dad spent something like £20,000 and re-mortgaged the house several times in the first years," said Hamilton on the Graham Norton Show in December. "If my dad hadn't done the work he did and if I didn't get signed when I was 13 by Ron Dennis then I wouldn't be sitting in front of you today, I'd be doing something different.

"There were times along the way when I'd come home from school and I'm like 'I'm ready to go' and dad would be like 'sorry, we don't have the money this weekend but hopefully by next race we'll have the money to keep us going'. So my dad's the real hero, I'm just the one that's in the spotlight."

Pay drivers are nothing new, and while over the years we have seen youngsters come into F1 courtesy of driver programmes, generous sponsors and even governments, we are living in a time where one billionaire has bought a team, in part to further his son's career, while a number of others are waiting on the sidelines.

However, the spending war aimed at getting youngsters into the pinnacle of motorsport is beginning earlier and earlier, and several times last year Lewis Hamilton admitted concern that 'ordinary' kids from 'ordinary' backgrounds are being priced out of motor sport, unable to even get that first precious foot on the ladder.

"When people ask me where the next me is coming from, I say: 'These kids come from wealthy backgrounds, not from the struggle I came from'," said Hamilton in 2018.

"It goes to the fundamentals of how the sport is governed," he added. "There are so many aspects that are not being tackled. There are only wealthy kids coming through. There are not kids from working-class families."

"I've got a friend of mine who was nearly in Formula 1 and he got leapfrogged by a wealthy kid," he said in December, "and then his opportunity was gone. So I want to somehow get it back to basics. I want to get involved in working with the FIA and Formula One, because they can do more to give back I'd say.

"It doesn't need to be as expensive," he insists. "I want to get it opened up because when you look at football, at tennis, there's grassroots."

Referring to motor sport's junior championships, he warned that they "are getting continuously more expensive, and don't generally need to be.

"Karting is getting more and more expensive, but it doesn't really need to be. But again, it's because the business heads are not aligned with my thought process.

"It's not possible to bring that cost down because it has become a business," admits the Austrian, "so you need to have a sugar daddy or a rich daddy."

"At a junior level there are many drivers who win championships but don't have the funds or backing to move up to F1. It is about time that a career path structure was put in place to make sure that drivers who are proven winners are rewarded with a guaranteed route into F1."

He warned that if this doesn't happen, "F1 could end up with the majority of drivers paying for their drives, rather than earning them through being a junior champion."

The world champion's father believes that one idea might be a draft and selection process that allows only the best through on merit, and if a driver fails to meet set performance targets after two years he could be replaced.

"You could also limit the drivers' contracts with a team to three years so that the leaders would have to trade with their rivals below them," he adds. "It would give others an opportunity to get the best drivers and to win races and ultimately championships.

"The dominance of one team and driver for several years has had its day," he says. "Drivers managing tyres, engines, and not being allowed to race the pants off the race car is not real seat of the pants motor racing like it used to be. Mixing it up would be great for the sport and the public who want to see the best racing drivers, real competition and exciting racing."

It's said that one recent addition to the F1 grid came with a 'war chest' of around £5m, but even this pales into insignificance when compared to the Strolls, Mazepins and Latifis of this world.

Indeed, Rutland racer, Teddy Wilson, like Hamilton a British Cadet karting champion, has been racing in F4 in the US for the last two seasons because it is "significantly cheaper than racing in Britain". Though shortlisted for the Aston Martin Autosport BRDC Young Driver of the Year Award last year, he had to withdraw half-way through the season due to a lack of funding.

The youngster - pictured with Lewis Hamilton, Enaam Ahmed and Lando Norris in 2014 - beat 36 drivers to win the opening race and finished seventh in the championship, despite only being able to contest 8 of the series 17 races.

Competing against rivals from cash rich backgrounds, Wilson is struggling to keep up in terms of financing his racing and has had to develop business skills in a bid to secure funding. Aiming to race in the Ginetta GT4 SuperCup supporting the British Touring Car Championship this year, he has knocked on doors of industrial estates, presented to a room full of investors at events abroad and business festivals, and also learnt vital management skills in his bid to raise the necessary funding.

The sport really does need to start paying attention to its grass roots, for unless action is taken F1, and its numerous feeder series, will become the exclusive domain of the super wealthy and influential.