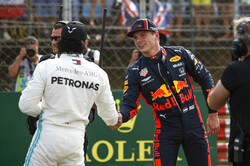 In a recent interview with F1 Racing magazine, two-time world champion, Fernando Alonso opined that though Lewis Hamilton has "made a step forward", "is more competitive" and "more prepared", rivals have not exploited his weaknesses.

"If you study Lewis' season, there is always a common trend," said the Spaniard. "He starts the year slowly and no-one takes the benefit of that. We all get excited that it will be the year of Bottas, but it's not.

"Maybe his weak points are not real and everything is calculated but it would be nice to discover," said Alonso, who is looking to return to the sport in 2021.

"Lewis is very good, he is absolutely one of the best but he is not God," said the youngster, who claimed three victories last season. "Maybe God is with him," he added.

Asked whether he believes he can end the Briton's run of world championship titles, the Dutchman's response was emphatic. "Yes," he smiled.

Like Helmut Marko, Verstappen believes that in order to take on Hamilton and Mercedes, Red Bull and Honda must be on the pace from Melbourne and must come out fighting.

"We really want to mount a challenge to especially Mercedes and I think we can do that," he said. "If we start within two-tenths, we can really apply the pressure.

"Everybody's fired up and everybody's very motivated," he grinned. "Coming off last year, at the end, we were very competitive."

"Honda did such a great job last year," added team boss, Christian Horner. "They brought more performance and power and are getting very, very good.

"They are getting very close now to Mercedes. It's up to us to come up with the right chassis. Going into this year we feel better prepared and earlier than we have certainly for the last five years."