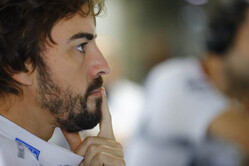 Left for dead by Marcus Ericsson's Sauber, as his frustrating return to McLaren continued, it was understandable when Fernando Alonso let his emotions get the better of him.

"It feels like GP2," he told his engineer. "Embarrassing, very embarrassing," he added.

Having missed the season opener following a mysterious crash in pre-season testing, Alonso's return to McLaren was a litany of failure, as disaster followed disaster, much of it down to the unreliability and lack of competitiveness of the Honda power unit.

Not once did the Spaniard, or teammate Jenson Button, make it to Q3, while by the time of the Suzuka race he had suffered six DNFs.

Though his outburst was understandable, the Spaniard admits it was regrettable and not for public consumption.

"It came from a place of frustration," he tells F1 Racing magazine, "and maybe I should not say that, but I didn't say it in the TV pen or the press conference. I was talking to my engineer in a private conversation. It was not meant to be public.

"But the engine was very bad," he adds.

McLaren and Alonso persisted with the Honda for two more seasons until deciding to part company, the Japanese manufacturer subsequently joining forces with Toro Rosso and then Red Bull. Just one year later, following a season in a Result-powered McLaren, the Spaniard opted for pastures new.

Despite his disappointment and frustration at those three wasted seasons however, Alonso bears Honda no ill will, and is delighted to see the Japanese manufacturer winning again.

"The first year in Jerez, in four days we did seven laps," he recalls. "Now Honda wins a race and I receive a lot of messages that read: 'GP2 engine wins now, it should be a sad day for you'. I'm very happy, but the engine I had in the car was not the same as the one winning in Brazil.

"If a top driver today goes through the performance that I went through, I could not imagine what they would say. In 2015 I was always fighting to get out of Q1 and had 575 places of penalties.

"I say things that I think and that I believe. That's because I believe those things are the truth. Sometimes I can be wrong. But I don't see things that I do that others are not doing.

"I don't read extra things from what others are saying, but I see mountains and mountains of the things I say..."