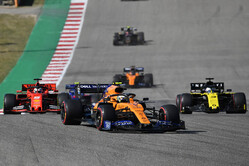 While the $175m (£133.8m) budget cap due to be introduced in 2021 will see the likes of Mercedes, Ferrari and even Red Bull have to seriously cut back, downsizing in terms of staff numbers, development programmes and facilities, many of the other teams on the grid simply won't have the funding to reach the limit, but will nonetheless be hoping that the move allows them to close in on the 'big three'.

McLaren, which has long - certainly under its new management - championed the introduction of the cap is aiming to have the budget in place to be able to match the 'big three' in terms of the spending limit as it seeks to move further ahead of the midfield and take the fight to Red Bull, Ferrari and Mercedes.

"The target for us is clearly to run at the budget cap," says team principal, Andreas Seidl, according to Motorsport.com. "There's a clear commitment that we will run at the budget cap because obviously that's the only chance to be able again to fight the big ones; you need to be on a level playing field in terms of budget."

However, while the Woking team may well have the necessary money in place for 2021, and is well aware of how to bet on F1 in terms of risk-taking, it is this year when the 'big three' will be spending like there is no tomorrow, in their efforts to be fully prepared for when the budget is finally introduced.

In this respect, Seidl admits that McLaren cannot, and will not, get involved in a spending war.

"You need to be realistic to what is achievable," he says. "Even if someone will give us for next year a hundred million more, you first need to be able to digest that and to put a structure in place that actually can produce more output in this short period of time.

"In the end, there's a limitation placed on the CFD side, on the wind tunnel side, so there's only so much you can do, and aero will also be in the future the key performance differentiator.