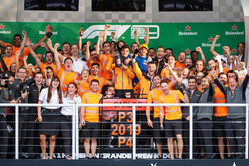 There have been times in recent years when it was hard to believe that not too long ago, McLaren and Williams represented not only the best of British in Formula One, but were among the most successful teams in the entire history of the sport.

While much is made of Ferrari's long history in the sport, with 863 starts, McLaren, and Williams (744), are not that far behind the Maranello outfit's 991.

And While Mercedes has now surpassed Williams in terms of drivers' titles, it trails the British teams in terms of constructors' championships and race wins.

Sadly, Williams decline seems set to continue, while this year saw a remarkable, and much welcome, step forward from its Woking rivals.

Claiming a convincing fourth in the team standings, McLaren driver Carlos Sainz held off Pierre Gasly and Alex Albon to claim 'best of the rest' in the Drivers' Championship.

Clearly revitalised by its switch from Honda to Renault power, while it will be interesting to see the Woking team's progress next season, even more interesting will be the year after when it once again partners with Mercedes.

Buoyed by his form this year, and anticipating the Mercedes engines in 2021, Carlos Sainz also believes the new regulations will present a significant opportunity for the Woking team to claim its 'rightful' position at the head of the field.

"McLaren might have taken a lot of years to get back on top, but '21 allows us to create kind of a shortcut to a better position," he told Sky Sports," and we need to take that.

"I think 2020 is still important because we want to continue the trend," he added, "but '21 is an opportunity.

"I don't say we need to do another 1.5-second step like we've done from last year to this year," he continued, "but keep digging those tenths out of the car and just keep the way we're going at the moment."

Speaking of his own remarkable form this year, which saw him score 13 points finishes, not least his first ever F1 podium in Brazil, he said: "I remember last year finishing in Abu Dhabi on a high with P6 and going to McLaren thinking, 'if I get everything together, I can do well in McLaren'.

"But obviously it was an unknown what was going to happen with me and McLaren and how the team was going to perform one year later.

"But every sign that I could see from the team was positive. I went testing and I saw a team atmosphere that I have never seen in any other team before. This created a big positive feeling going into the winter.