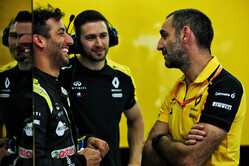 Despite being the driving force behind the introduction of the hybrid formula, Renault has never mastered it.

Meanwhile, since returning to the sport as a constructor in 2016, the French team has yet to score a podium finish.

While the exploits of Carlos Ghosn occupy the front pages, the future of the team he was so keen to see back in the sport remain in doubt, with the French company's interim CEO recently admitting that the team's future is "under review".

Yet, while Renault's future beyond 2020 remains in doubt, team boss Cyril Abiteboul insists that 2021 represents a "big opportunity" for the French team.

"It's a big opportunity," he tells Motor Sport magazine, "but I don't want to make the same mistake again.

"There is no team looking at 2021 the way we are looking at that particular year," he continues. "I don't think there is any team as advanced as we are on 2021, simply because we have decided to allocate lots of resources to it.

"But 2021 should not be an excuse for having a poor season in 2020," he admits. "I am expecting a better season, and that we are able to deliver on the changes and improvements that we've made this year."

This is brave stuff from Abiteboul, especially in light of the fact that leading up to the launch of the team's 2019 contender, he and his staff, including drivers, Daniel Ricciardo and Nico Hulkenberg, were told not to make any predictions about the forthcoming season.

On reflection this was a wise move, for at a time many - not least new (very expensive) signing, Ricciardo - were expecting the French team to close the gap to the 'big three', Renault actually lost ground and finished fifth behind McLaren, with Toro Rosso almost pipping it at the post.

"Moving from P9 to P4 was fantastic," he says of the progress made in the team's first three seasons back in the sport, "but maybe to a certain extent, it flattered us.

"The good performance of last year hid some intrinsic weaknesses that we only witnessed this year with a great driver, in Daniel, and with all the pressure that comes in having such a driver. It's something we only corrected late this year.

"Daniel has been great at showing the remaining weaknesses we had, and that's put us in a situation where we've nowhere to hide, and to make the changes that needed to be done. This year has certainly exposed what still needs to be addressed in our package."

The fast-talking Frenchman admits that the team's struggles have affected him personally.

"Formula One is a tough sport, where you can't hide as a team principal," he says. "I've grown up, but I also need to keep improving my own package. It's like everyone.

"I'm a bit Latin, I'm not just French," he adds. "I'm from the southern part of France. I'm extremely emotional, I take things seriously. I love racing but I struggle to live with the fact we are losing every weekend, and that's a fact. Even though we are progressing, we are losing every single weekend. Number two is the first of the losers.

"It's a change for me. I need to learn to lose, but I don't want to lose sight of the fact that I want to win, and that appetite for winning is still growing with these years of not winning.

"Every single year that goes by, we are getting stronger," he insists, "even this year. We are stronger this year for finishing P5 than we were last year in finishing P4. I've no doubt about that, and that's what matters.

"And every year we are stronger brings us closer to the ultimate goal, which is to win, which is my individual goal. Whether I make it happen or not is another story.

"But I can tell you that right now I'm not close to retiring unless I feel it's not possible, or unless we have achieved it, and I am confident that one day this team will win.

"We've done it before, and we will do it again."