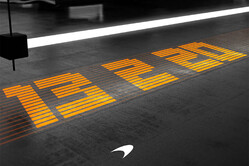 Taking over his team's You Tube channel, Lando Norris has revealed the launch date of McLaren's 2020 contender, the MCL35.

In a live broadcast from the MTC, following a brief look at some of the historic McLaren racing cars on show, the Briton 'crashed' a meeting at which the launch of the MCL35 was being discussed.

Following several minutes of chat with the participants in which he talked about the weight he had put on over Christmas, he asked what the meeting was about, even though a sign on the wall clearly referred to the launch, along with the word "confidential".

"I heard it was on the 13th of February," he said. "Is that right? Zak told me it's on the 13th..." at which point the broadcast was abruptly terminated.

In a subsequent tweet, McLaren confirmed that the launch date was indeed 13-2-20.

Absolute nonsense of course, with the whole reveal being entirely intentional, but a clever piece of fan engagement by the Woking team.

McLaren is the third team to officially announce its launch date, with Ferrari set to unveil its car on 11 February and Alpha Tauri on the 14th, while Red Bull is believed to be unveiling the RB16 on the 12th.