Marko: Sainz is no Verstappen 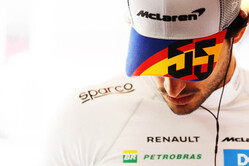 Dropped by Red Bull following a relatively weak start to his 2016 season, Daniil Kvyat found himself back in his old seat at Toro Rosso as the European phase of the season got underway.

His replacement at Red Bull got his new gig off to the perfect start when he won first time out, and while he will be the first to admit that he benefitted from the Mercedes pair taking one another out on the opening lap, Max Verstappen was only too happy to take the chequered flag ahead of Ferrari's Sebastian Vettel and Kimi Raikkonen.

Red Bull's motorsport advisor, Helmut Marko admits he was never in any doubt about which of the two Toro Rosso drivers should replace Kvyat, but though Verstappen clearly deserved the promotion, many found it strange how Carlos Sainz was subsequently loaned out to Renault and then McLaren.

At Woking the Spaniard appeared a new man last season, finishing 'best of the rest', and causing many to wonder if perhaps Marko had been wrong to let the Spaniard slip through his fingers.

Not so, says the Austrian.

"Sainz was partnered with Max and we had to choose which one of the two to promote," says Marko, according to Motorsport.com.

"And when you get right down to it, Carlos is quick, we would not have signed him otherwise, but he is no Verstappen.

"We helped Carlos with his career," he continued, "and we didn't have to let him go. But we allowed the move to Renault and then to McLaren. We still have a good relationship, but at that moment there was a Verstappen there, and there's a performance difference between the two."

Asked if the presence of Sainz' father was a factor in the Spaniard's obvious unrest at Toro Rosso in 2017 - an odd question when one considers the reputation Jos' father enjoys - Marko said: "I wouldn't say he has a political father, rather one of those motorsport fathers who doesn't look at it objectively - which is understandable - and always does what he thinks is best for his son.

"But it's not an isolated case, and by far not the worst,” he added, a possible reference to the originator of the dreaded 'Verstappen slappen'.