Zandvoort to be a circuit "for brave drivers" 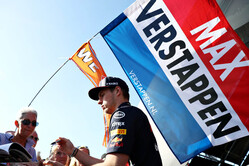 While anticipation among fans - as opposed to an ever hysterical broadcast media - is somewhat lukewarm in terms of the forthcoming Vietnam Grand Prix, the same cannot be said of Zandvoort.

Following an absence of 35 years, the seaside track returns to the F1 schedule as part of the sport's efforts to capitalise on the 'Max factor', and in all honesty, though the track first hosted a race in 1948, it might well have been constructed with Mr Verstappen in mind, certainly according to the man who has led the redevelopment of the track, Jarno Zaffelli.

"According to our simulations, the drivers can go full speed through Turn 2," he tells de Telegraaf. "After that, it becomes very interesting to see which line they take in the Hugenholtz bend.

"The angle of inclination in the bowl bend exceeds eighteen degrees," he adds. "This is really going to be a circuit for the brave drivers. Certainly on that part and on the Scheivlak.

"I think there is a lot to talk about. For the drivers, who of course are curious how they should tackle those bends and where they can overtake."

He also revealed that his company, Dromo, has limited the amount of data it has given to the teams for their simulators in a bid to add some "surprise" when the F1 circus rolls into town in May.

The teams have the raw data," he told Formule1.nl. "They do not have the entire circuit. We will keep that data to ourselves for a while.

"We do that because we do not want them to have all the time to simulate. That way there is an element of surprise in it, that is my preference."

"Of course Jarno has a lot of detailed data from Dromo's own simulations," said Zandvoort sporting director, Jan Lammers, according to Motorsport.com. "But all modern F1 teams work scientifically, so if he gives all the data to them they will enter it into their simulator programmes in no time. That is exactly what we don't want to happen. So what he gives them is very limited.

"We want drivers to go out on the track during Friday practice to find the best possible set-up. So that is a bit of old school racing and makes the weekend probably a bit unpredictable. It will be a bit of a challenge for them.

"He absolutely doesn't want them to have too much information beforehand, so they can do a lot of preparatory work in the simulator. He basically wants teams to find out everything during Friday practice sessions. Maybe that could make the weekend a bit more exciting.

"Normally Formula 1 teams are a bit cautious during Friday practices, to save tyres for the rest of the weekend," he continued. "But I think the drivers will drive even more laps on Friday than during the race on Sunday, because of the new track. Everyone will be out on track pretty early in FP1. They will have to make the most of Friday practices to gather information for the best possible setup on Saturday and Sunday.

"The Luyendyk corner will be a bit more spectacular than we initially thought," he added "That is because this corner will be two metres higher than before, which means drivers will go a bit downhill when they enter the main straight. These differences in height make it even better for drivers."