Marko: Signing Verstappen a no brainer 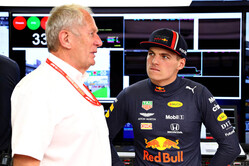 Though there is no guarantee that Red Bull and Honda can come up with the package to dethrone Mercedes and Lewis Hamilton, extending Max Verstappen's contract until the end of 2023 is a positive move by the Austrian team.

With Charles Leclerc signed up at Ferrari until the end of 2024, the only team that might be able to lure Max Verstappen away from Milton Keynes was Mercedes, and amidst the speculation linking Hamilton with Ferrari, Helmut Marko was worried.

Furthermore, Honda has only committed to 2021, leading to speculation that the Japanese manufacturer, which has consistently warned about costs, not to mention performance convergence, calling time on its latest F1 venture.

Marko believes that agreeing the extension with Verstappen, will persuade Honda to commit to the sport, while preventing Mercedes from making a move for the Dutchman should the media be proved correct and Hamilton heads to Maranello.

"It was difficult for us to estimate what exactly was the story between Ferrari and Hamilton," he told Auto Motor und Sport. "But it was clear that Mercedes must act if Hamilton were to go to Ferrari in 2021. Max would have been the first driver they'd aim for.

Asked about Honda, he said: "They have taken the news about the contract extension positively.

"Max is a priority for Honda," he added. "They love his aggressive driving style and his open nature.

"Discussions with them will take place soon," he continued. "I'm waiting for an appointment to find out when I have to fly to Japan."

Revealing that the 2020 power unit is giving positive results on the test bench, he warned: "If the others teams want to be better, they'll have to make dramatic gains.

"Max knows what is going on at Honda," he added. "He has already seen the new car and he appreciates the continuity in the team.

"In the end, there was a common will between him and us."