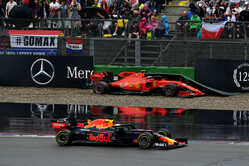 While the multi-million deal Bernie Ecclestone agreed with Sky - one of his last acts before the sport was bought by Liberty Media - may have helped balance the books for Formula One, the move to Pay-TV in the UK has taken its toll on viewer numbers.

This season, the first year in which F1 was shown almost exclusively on Sky - Channel 4 broadcasting only one race (Silverstone) live - has seen viewer numbers plummet.

Reduced to showing all but the British Grand Prix in highlights form, Channel 4 saw its cumulative audience drop by 10.8 million on 2018, the broadcaster drawing 34.7 million viewers in total this year.

Unsurprisingly, Channel 4's most watched highlights show was the Hockenheim thriller, with 2.1 million tuning in to watch one of the most dramatic races in living memory.

Interestingly, according to the Independent, this was 4% more than the Monaco Grand Prix attracted and almost double the audience for the title-deciding United States Grand Prix which saw its audience 2 million down on 2018.

Ironically, with the promoters unable to meet the estimated $20m hosting fee, this year's Grand Prix was probably the last time F1 will race in Germany for some time.

The viewing figure data, which is compiled by the Broadcasters’ Audience Research Board (Barb), and is considered to be the industry’s gold standard and the official estimate that channels use to sell advertising, reveals that though Lewis Hamilton secured the 2019 title in Austin, Channel 4's audience was down by 2 million on 2018 when the event was shown live. Indeed, Brazil, which, like Germany, was incident-filled and uncharacteristically unpredictable didn't even make into the Top 15 most watched programmes on Channel 4 in the week in which it was broadcast. Incidentally, the audience total for the Interlagos event was not publicly disclosed by BARB but was instead provided by Overnights.tv, one of its official data partners.

Intriguingly, just two races pulled in more viewers this year than in 2018, the Japanese and French events.

Widely considered one of the most boring races in living memory, the French Grand Prix attracted 19% more viewers than 2018, which makes one wonder how bad the alternative programmes must have been that particular Sunday.

Shown live in the early hours in 2018, the Japanese Grand Prix highlights show a year later - broadcast in the afternoon - saw its audience up by an impressive 52% to 1.5 million, a scenario that F1’s global research director, Matt Roberts had previously predicted would be the norm this year.

"Channel 4 will have the highlights next year and we have worked with them to ensure they show the races in a favourable prime time slot," he said in late 2018. "We estimate that we will actually have more viewers next year in the UK (thanks to this prime time slot) than we had this year."

And while Channel 4's audience figures were dropping down the order quicker than a Haas, they were not flocking to Sky as F1 bosses – and indeed Sky bosses – had hoped.

Indeed, despite the pay broadcaster having the exclusive rights to all but one race (Silverstone), the audience for the dedicated F1 channel was down on 2018. This, despite a monthly access deal which saw subscriptions slashed by 44% to £10 and even the broadcasting of IndyCar, not to mention F2.

While the German Grand Prix was the most popular highlights show for Channel 4, in terms of live broadcasts the Hockenheim event was Sky's third most-watched race. Canada, which was broadcast at prime-time in the UK, was the second most watched race on Sky, with Bahrain being the most popular, courtesy of the fact that it was also shown on Sky One, essentially a 'free' channel.

With BARB only measuring the online streaming figures since August 2018, year-on-year data is not available. However, the number of viewers streaming F1 in 2019 combined with those who watched it on TV saw Channel 4's total audience up by about 2% and Sky by 4%.

With the teams receiving 68% of the sport's profits in terms of prize money, there are unlikely to be too many complaints from the likes of Mercedes or Red Bull, even though the boost from that deal Bernie Ecclestone agreed with Sky won't have the same impact in 2020.

However, the news is unlikely to go down with the likes of Lewis Hamilton, who earlier this year bemoaned the move to Pay-TV.

"(It's) definitely not cool," he said. "I remember growing up and turning on BBC and watching ‘Grand Prix’, it was awesome. It’s the fans that make the sport what it is so the more you almost block them or deter them the worse the business is going to be."