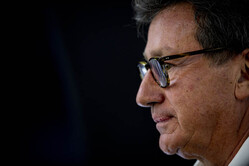 Once the title had been decided and interest began to wane, the media discovered a new means of reviving interest in F1 ahead of the winter break… and thus began the saga of Lewis Hamilton joining Ferrari.

Amidst the speculation were claims from the Italian media that the Briton had held "secret" meetings with chairman John Elkann, and when asked about this in Abu Dhabi the world champion was giving little away.

"Naturally everything that happens behind closed doors is obviously always private with whoever it is you end up sitting with," he told reporters, "but I think for many, many years I've never ever sat down and considered other options, because we've been on a... just driving straight ahead into the path that we've been on and the journey that we've been on and to be honest, I still think we're on that path and I think there's very little that's going to shift it from that but I think there's no harm in...

"I know Toto is also looking at his options in terms of his future and only he will know what is the best thing for him and his family. So I'm waiting to see what he's doing with that.

"I love where I am so it's definitely not a quick decision to do something else, but of course I think it's only smart and wise for me to sit and think of what I want... if it is the last period or stage in my career. Actually I want to keep winning so I think that's... I want to keep being able to fight with these guys as well. I can't really tell you what else is going to happen moving forwards."

Speaking to the media in Maranello, Ferrari chief executive, Louis Camilleri shed a little light on those meetings.

Pushed directly on whether Hamilton might join Ferrari, He said: "You may be somewhat disappointed by this answer... but the fact is we have a long-term agreement with one driver and with the other driver the agreement expires at the end of 2020.

However, when asked, if the move should ever come about, if the Briton would be allowed the same personal freedom at Ferrari as he enjoys with Mercedes, Camilleri was keen to bring the topic to a close.

"Honestly, I don't want to go there," he said. "You are trying to push a bit too hard on the Lewis story. It's totally premature and we'll look at our options at the appropriate time and we will see what is the best fit for us as a team."