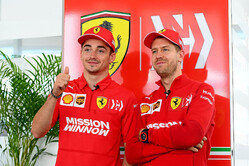 As if stepping out of the technical office to become team principal wasn't enough of a task for Mattia Binotto this year, the Italian had to help rebuild Sebastian Vettel following his roller-coaster 2018 season, while guiding the talent that is Charles Leclerc.

Ahead of the season Binotto announced, quite understandably, that preference would be given to four-time world champion, and veteran of 219 Grand Prix, Vettel, a move which soon had the media bristling.

Just two races into the season however things became a little more complicated, with the Monegasque claiming pole position in Bahrain and subsequently ignoring team orders to hold station behind Vettel in the opening stage of the race.

From then on, it was only a matter of time. While Vettel continued to make needless errors, seemingly having learned nothing from the previous season, Leclerc's confidence rapidly began to build.

Despite some atrocious strategic calls and pre-race arrangements which were reneged on by the second or third corner, once Ferrari got its act together after the summer break, it was Leclerc who looked best set to take on Red Bull and Mercedes.

1997 world champion, Jacque Villeneuve, never one to shy away from controversy, believes that Leclerc, with the help of Ferrari itself, damaged the Italian team, which should have maintained its pre-season 'promise' of giving preference to Vettel.

"Ferrari fell apart this year," writes the Canadian in a piece for Dutch website Formule1.nl. "A lot depends on your two drivers and the chemistry in the team was just not in balance.

"Ferrari never said to Leclerc 'look it's your first year with us, your second year in F1. Relax, learn from Vettel'," he continues. "Then the team would have moved further ahead than now. Instead, from the first race, Leclerc has had the approach of 'I'm going to show that I'm the boss and that Vettel is the past. I am the future'. And there was a growing belief among the fans that Leclerc is coming to save us and the media went along with it.

"I think that hurt Vettel," he adds. "A similar situation with Ricciardo at the time at Red Bull. That didn't help Vettel.

"But Leclerc simply wasn't ready for that role," Villeneuve argues. "This year he drove for pole positions and sometimes for victories but not for the championship. So this whole situation has damaged Ferrari.

"I don't know what Mattia Binotto could do about that. I do not know the agreements, in the days of Irvine and Barrichello this was simply established from the start."