Vettel: I must do better... I can do better 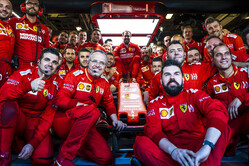 It is somewhat ironic that as Sebastian Vettel was giving one of his most lacklustre performances of a largely lacklustre season, countryman, Nico Hulkenberg, who is without a drive for next year, was being voted 'driver of the day' on the official F1 website, despite finishing a distant twelfth.

Speaking at the end of the race, at a time Ferrari is being linked with Lewis Hamilton and Charles Leclerc, in his first season with the team, has largely out-performed, and certainly out-scored the German, Vettel was in no doubt that things must improve.

"We didn't have the year that we were hoping for... full stop," he told Sky Sports. "I think the reasons are clear, the lessons are clear, now it's up to us to make sure to take them on board.

"As a team we must perform stronger, as an individual I think I can," he continued. "I must do better... I can do better. It wasn't a great year from my side."

"I don't think it was as bad as it looks", he said. "There were many small things probably leading to maybe not a great picture in the end.

"But still, I'm the first one to look at myself and if I'm honest, I know that I can do better. That's for sure the target for next year, to do a step forward. And hopefully we get a stronger package as well to fight with Mercedes and Red Bull at the front."