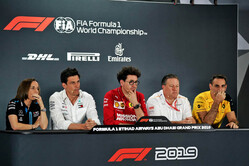 Q: Mattia, I'd like to take you back to the last race to start with. You've no doubt studied the footage of the crash between your two drivers. What's your verdict?
Mattia Binotto: Hmm... what's the verdict? I think there may be different versions. If you listen to the drivers, they may have their own version. I think at the end there is one true version, which is that they damaged the interest of the Scuderia Ferrari, and by doing that, damaging themselves. We discussed altogether, we looked again at the video. I think what's always important when that type of thing happens, there is always something which is triggering it. And more important is to understand what's triggering it. It's the only way to make sure that in the future it's not happening again. And that's something that certainly we discussed - between us.

Q: Charles spoke yesterday, when he was summing up 2019, saying it's been a weird season. How would you describe it?
MB: Should I clarify what he said? I don't know. Weird... I would say it has been an intense season. Many things happened. If I look from the team perspective or the technical point of view, I think it has been a linear season, somehow. If anything's weird, I think it's we were expecting a better performance after the winter testing, and I think that we never really understood what happened from Barcelona to Australia. If anything, those guys certainly made a jump ahead. I think that from our perspective, then we had performance weaknesses in the car that we improved all through the season, as I said, in a linear way - and I think the car in the second half of the season was certainly better, compared to the first part. We are still not the best car in the race. I think that other cars are still faster in the race. We are not certainly the best car in cornering and at least we know our weaknesses, working on it and from that respect it has been a bit linear. Weird, I think, from Charles' perspective, very first year for him in Ferrari, a lot of emotions, a lot of things, he is the driver that has started most of the time on pole position this season, which is a great achievement. Two victories. Up and down, as well in his performance relative to his team-mate, not always so consistent, if you look from the start to the end. But I think it has been a season where an entire team, the drivers, we learnt and I'm pretty sure it will make us even stronger in the future.

Q: Toto, you miss a race, look what happens! How difficult was it to watch events at Interlagos from afar, and how did you stay in touch with what was going on?
Toto Wolff: Yeah, it was weird, because it was the first race that I missed since Williams times - Barcelona 2012. I did it because there's just so much business going on at the moment and I had a Formula E weekend the following weekend and obviously Abu Dhabi and things needed to be done. Normal office work. It was also for me an experiment to see how I would take it. I know the team is perfectly capable in doing that without me. There were voices that it would actually be beneficial for me not distracting anybody around the racetrack. So, what happened, would have happened with me there. I was hoping that it would be a perfect weekend and that I could miss some of the bad ones next year - but at the moment I am off that plan.

Q: It's been a cracking end to the season with three teams battling for wins. Does that make you nervous for next year? Do you expect it to be the closest battle in the hybrid era?
TW: Yes, I think so. We have always defended the standpoint that by letting the regulations alone, performance convergence would happen - at least there's a high probability that convergence happens rather than throwing the dice and introducing something new and I think we have seen that. It's fair to say that there are three teams capable of winning races today and probably winning championships if things are being put together. McLaren has massively caught up, probably the steepest performance slope of all teams and will be there or thereabouts, in my opinion. So, yeah, I see this very much as being a much tougher season. I don't think we are going to see the kind of 10 race wins or 12 race wins per team for next year any more - but obviously we will be trying everything to optimise our weaknesses and continue to perform well.

Q: Zak, the team has sealed fourth in the Constructors' Championship. Given where it was a year ago, in P6, and then P9 the year before that. How much of an achievement is that?
Zak Brown: I think it's been a big achievement, given where we've been the last couple of years. I think the team's done an excellent job, both at the factory and at the race track. Everyone is contributing. Renault has played a big part in us getting more competitive again. They've been a fantastic partner. Drivers are doing a very good job, bringing the car home and in the points often, so it's certainly been a pleasure racing this year, when I look back to Abu Dhabi last year.

Q: If the past 12 months have been fruitful, can you just tell us a little bit about the next 12 months - because you've got a harder split programme than most teams: preparing a Renault-powered 2020 car and then a Mercedes-powered 2021 car.
ZB: Yeah, everyone's going to be in the same boat, in the sense of the '21 is going to be such a change from 2020 that everyone's going to be starting from a clean sheet of paper - but we're up for it. It's one of the reasons we made an early decision, to give ourselves as much time as possible. I think '21's going to be exciting for Formula 1 and for the fans because when there's a big change like that, someone's going to get it right; someone's going to get it wrong and, as Toto said, tends to converge over time but I'm excited for the '21 season - but also excited for '20, of course.

Q: Claire, if we could talk a little more about that 2020-2021 split from Williams' point of view. How difficult a juggling act is it when there's such a huge opportunity in 2021?
Claire Williams: It's clearly not easy. I think we've all talked about the challenges that we're all going to face next year. I think everyone in the pit lane is going to have a challenge on their hands. I think it will be slightly easier for the top three teams with bigger budgets. For us, it is a real challenge back at the factory, trying to run those two programmes, for next year, for '21 - but obviously we've been trying to run this year's programme, when we haven't let development slide. We've got to continue to bring upgrades to the car over the course of this season, which we've been doing, and really we're looking at '19 and '20 as one long campaign. So, it is difficult - but we wanted the '21 regulations to come in. We lobbied hard for them, so we've just go to deal with the problem head on and do the best job that we can.

Q: News yesterday on the driver front. Just a word on Nicholas Latifi. Why have you chosen him to partner George Russell next year?
CW: I think it was probably a fairly obvious choice. We're pleased that we're able to make an announcement. It's been a long time coming and probably an obvious choice for us. Nicholas has been with us now this year, as our reserve driver. He's done six FP1s for us and some test sessions. He'll run next week at the Abu Dhabi test, and he's just become a really great part of the team. He's got a great personality - and from a track performance perspective, he's done a good job in the F2 campaign this year. He's obviously hoping to close out P2 this weekend, and I think he'll be instrumental in driving the team forward. He's got a very similar personality to George, and George has proved how motivating for everybody in the team, and I think Nicholas will fully mirror that next year.

Q: Cyril, Renault is involved in a very tight battle with Toro Rosso for fifth place in the Constructors' Championship. Just eight points the difference. Given the nature of this circuit, how confident are you in your car's performance?
Cyril Abiteboul: If you really ask me for this circuit, I'm very confident. We were competitive last year. FP1 is not much to say because FP1 is very particular here, given the conditions but no, I think that indeed Toro Rosso with different circumstance that they've benefited, and that also managed to make happen in the close fight but I think it's also fair to say that, on average, we are a clear P5. The target was to be P4 so we have not reached that target but average we deserve that P5. We didn't benefit of any particular result that have helped in that respect. No podium when it could have been possible again. It's our own fault, so I'm not blaming anyone in particular. But no, I think we will have a good fight tomorrow and Sunday, but I believe our chances... I want to believe our chances are high to finish P5.

Q: Now, overall it's been a difficult season for you guys. What have you learnt from the really tough moments - and when were they?
CA: There's been many tough moments. There's been good moments also. I think it's important to take a bit of distance, so if you ask me, it's really to manage, to learn about the resilience that you need in that sport. Sometimes people believe how difficult it is as a sport, as a business also, given the difficulty and the way that the world is changing. We are on a ramp up. Zak has just mentioned a good trend that they have: P9, P6, P4. It's exactly the trend that we had also: P9, P6, P4. I think all of that is possible, but the difficulty first is to maintain that P4 position now that McLaren has been able to come back from where they were before and the main difficult will be not to stay P5 or P4 because we should not be content with that, and I'm sure Zak is not content with that - but also to bridge the gap with the top teams. That will be the next difficulty and still the target for us. It's a target for 2021. Everything in our programme has been built around that long-term target of 2021 because, in accordance to our strategy, that's really the first opportunity to make that happen. But before 2021, there is '19, there is '20. And there is a short-term result and a short term pressure that everyone is putting on all of us. And that's fine. Again, that's part of the sport.