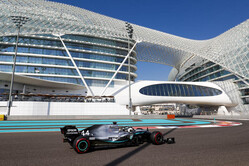 Valtteri Bottas: It's been a good day out on track; the car was well-balanced from the get-go. I had to take a fresh engine for the weekend which also seems be to working well. My pace looked competitive in both sessions, so from that perspective we've definitely started the last race weekend of the season off on the right foot, although I'm sure there's still room for improvement for tomorrow. The track was a bit dusty on the first few runs in FP1, but it evolved quickly and then felt pretty good all through the session. The end of my FP2 session was compromised by a minor incident with Grosjean; I thought he had seen me going for the overtake on the inside, but by the time I realised that he hadn't seen me, there was no way for me to escape anymore.

Lewis Hamilton: It's been a bit of an usual Friday for me; I was struggling to get into the rhythm today, but you have your good and bad days. Nonetheless, the car still felt good, but there's definitely areas that we can work on as a team and areas for me to work on personally. I'll just sit down tonight and make sure to get that straight for tomorrow. I've been trying to explore some new avenues with the car. We already know where it works well, so I'm pushing the car into different places, just trying to see if there's anywhere else I can exploit the car and the tyres for the future.

James Allison: It's been a pretty good day, Valtteri was strong from the outset in FP1 and kept that good pace going in FP2 on the low fuel and also in the race simulation runs. Lewis took a little bit longer to find his rhythm with the car but seems to have got that now and was certainly fast and very effective in the long runs. The car is behaving itself and we're hopefully of a good day tomorrow. Although we've had a strong day today, it's pretty clear from looking at the Ferrari and the Red Bull that they've got pace in their car as well, so it'll be an exciting day tomorrow in Qualifying where there'll be no room for error.