Ocon to drive for Renault at Abu Dhabi test 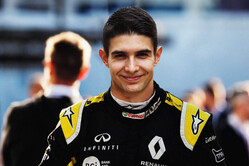 Renault has announced that Esteban Ocon will make his debut with the team at the two-day test that follows the Abu Dhabi Grand Prix.

Due to his test and reserve duties with Mercedes, it was unclear if the Frenchman would join Renault for the two-day end of season tyre test or be forced to wait until 2020.

However, the French team announced late today that the Frenchman has been released by Mercedes and will make his debut in Abu Dhabi.

"Esteban Ocon will officially join Renault F1 Team on Monday 2nd December and will take part in both test days at the Yas Marina Circuit in Abu Dhabi on 3rd and 4th December," read the brief statement from the team.

Since being replaced at Racing Point by Lance Stroll, Ocon has concentrated on simulator work for Mercedes, but was almost called on for race duty with the world champions when Lewis Hamilton felt unwell at the start of the German Grand Prix weekend.

The early debut with Renault was no doubt helped by the fact that, Mercedes boss, Toto Wolff, is also the driver's manager.