Hamilton: We've got two freebies to try some new things 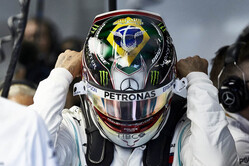 Both titles secured for the sixth successive year, Mercedes now can turn almost all its attention to 2020... and beyond, and Lewis Hamilton reveals that the German team will use the two remaining races this season "to try some new things".

"We've basically got two freebies to try some new things that can take place next year," he smiled.

"Next year we have even less testing before the first race," he continued. "I think it's only six days as opposed to eight. So every tiny bit of an advantage you can gain in changing things and adapting and being dynamic, hopefully could pay dividends next year. That's our goal."

While Ferrari appears to have rediscovered its pace, on the race sims in FP2, the world champion appeared to have the edge.

Asked about his lack of running in the opening session, he said: "It was kind of a pointless exercise. If you don't need risk it for the biscuit then don't!

"The second session was good, nice and smooth," he added. "Obviously the Ferraris are quite quick this weekend, or it seems today, and they were generally just beating us all in the straights so it'll be interesting to see how it develops."

Asked about the absence of team boss Toto Wolff, who is missing a race for the first time since 2013, Hamilton grinned like a schoolkid. "It's such a breath of fresh air", he said.

"He has such a presence within this team that even while he's not here, he's still here," he continued. "Everything that's been set up is because of him and all the people that he's put in place, and everyone is here still knuckling down, working as normal. It's just you don't see him on the pit-wall, you don't see him in the meetings. But I know he's on the debrief on the other end and listening to all the things we say.

"I think everyone's behaving as well as they can!"