Gasly confirms that he will remain at Toro Rosso 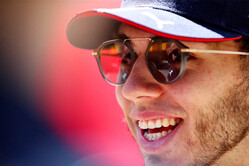 Not for the first time Pierre Gasly appears to have jumped the gun, announcing that he will be remaining with Toro Rosso before the team confirmed the deal.

In the moments after Red Bull announced that Alex Albon will continue to partner Max Verstappen, Gasly issued his own press release announcing that he will remain at Toro Rosso.

"Pierre Gasly is proud to announce that he will be racing with Toro Rosso in the upcoming 2020 Formula One Championship season," it read, "and is highly motivated to further build upon his strong results with the team.

"Following a promising first year in Formula 1 in 2018, where Pierre claimed 29 points for the team, and earned an impressive 4th place in Bahrain, the young Frenchman returned to the Italian team in the current season, scoring points in his first race back with the team and a further three times in the last five Grands Prix.

"Together with Toro Rosso, Pierre is delivering a strong campaign, fully ingraining himself with team and working hard with the talented engineers to develop the STR14 and yield positive results. With impressive adaptability, he has proven his strengths on and off the track, handling the pressure of arriving into the team, with a new set of engineers, building a relationship and getting to grips with a new car, to take the fight to the forefront of the highly-competitive midfield.

Having driven a strong junior career, the 2016 GP2 Champion is excited to start a new campaign and help the team to deliver their best performance in 2020.

"I'm really happy to continue with Toro Rosso for 2020," said the Frenchman, according to his release, "we have exciting challenges ahead of us. Toro Rosso has always been giving me the best chances to perform every season and I'm super motivated & dedicated to give back to the team, with the best results possible next year.

"The team has been improving every year, it's great to be part of the journey, and I'm very excited to see what we can achieve together in 2020."