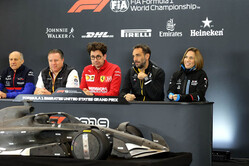 The 2021 regulations are now locked-in, having been unanimously ratified by the World Council, so can we start please by getting your thoughts on them. Perhaps Mattia, you could start?
Mattia Binotto: Obviously, as you said, it has been voted. As Ferrari we are part of the World Council, we voted as well in favour. We believe it is the right moment to look for a discontinuity, for our sport, it has to be sustainable, we are all aware of that. We need to work hard as well in the future on a more sustainable, green, as well, sport. There is a still much to work on, so if there is anything, I would avoid to say that it is locked down. I think this is still at a starting point where altogether now we need to collaborate, improve furthermore what is certainly a good set of regulations, but still much to develop, improve and certainly as well, looking at a more sustainable sport in the future, on the power unit, on the fuel, whatever can be done. I think that's a responsibility we've all got together. So far, we collaborate well with FIA and F1 but still much to do.

Cyril?
Cyril Abiteboul: Yes, I think it's good that it's done. It's an important milestone but, as mentioned by Mattia, there is so much more to be one. I would still acknowledge a number of innovations in this set of regulations, because there will be a new set of regulations with the financial regulations that will complement technical and sporting. Otherwise it's a compromise. Some people would have liked it to be a bit different, maybe a bit more open or a budget cap a bit lower, things like that - but it's a first step, in my opinion a good step, it's in Renault's opinion a step that's going in the right direction for a sustainable sport, so let's see what's coming next but it's good now that we have clarity on what's coming up for 2021. We can all now start building up this beautiful car that we have ahead of us, and start spending towards this new regulation.

Claire, your thoughts?
Claire Williams: I think from a Williams perspective we're delighted that that new regulations were approved by the World Motor Sport Council. They're everything that we've wanted to see from the various perspectives, whether they be technical and most clearly the financial regulations that are coming on board for 2021 are exactly where we wanted to be. We understand that they're a first step, moving forward but they're certainly a right step in the direction that we wanted to ensure that the sport - but also teams like ours - remain sustainable for the future. I think we're all very aware of how unsustainable at the moment Formula 1 is from a cost perspective. So, to have a level of cost-capping at this first juncture is really important to teams like ours. I don't think that can be underestimated. The technical regulations as well are a step in the right direction. I think there's probably some tweaking to do - but I think certainly as a first step they're exactly what we wanted to see.

Zak?
Zak Brown: I agree with everything that's been said before me. I think it's a good day for Formula 1. I think it's going to be exciting, 2021, because there'll be much change. I think through this process, the Formula 1 teams got closer relationships with each other, which is something that, while we certainly still don't all agree on everything, I think relationships have been built for the better of the sport. I also think working with Chase and Ross and the FIA, that's been a good process. I'm sure we all would like to see some things modified but that's always going to be the case. In our case, I think the budget cap, there was one area we would like to have seen something more aggressive, quicker, it would have been that, but it is what it is and I think most importantly we have clear direction moving forward.

And Franz?
Franz Tost: All the parties have done a good job. That means Liberty Media, the FIA and the teams to come up with these new regulations - because all the main topics are covered. What are the main topics? The cost cap - because we need to come down with the costs in Formula 1; b) the money distribution: it's more fair than it was before. Then the new technical regulations; the new sporting regulations and as well the governance. I think that's an important time frame to bring everything within next year and then 2021 in the right direction. It's a new start for Formula 1 and I hope it will be a successful start.

Zak, you've worked hard at restructuring McLaren over the last 18 months, so how much personal satisfaction does the prospect of P4 in the Constructors' Championship give you?
ZB: I'm very pleased with the season so far. There are still three races to go. We had a poor Mexico which I think was a good reminder that, while we've had a good year, with three races to go there's plenty of points still up for grabs but certainly the off-season progress, the people that we've brought on board, Andreas leading the team, James Key, Andrea Stella getting promoted, and really all the men and women at McLaren. Our relationship with Renault, they've been an excellent partner. I'd like to give them a lot of credit for our success this year and our improvements. And yeah, it's certainly a lot more enjoyable being at this Austin US Grand Prix than it was this time last year.

Cyril, while we're talking about restructurings, you announced a reorganisation of your aero department this morning. Just tell us a little bit more about that. Why have you done that?
CA: I think it's fairly straightforward what we're trying to achieve. This year has been marked be an amount of satisfaction but also some struggles. It's clear that this position of P4 that we had last year is going to be challenging to retain this year, to say the least, against Zak. But I'm happy that it's a Renault powertrain that's going to maintain that spot in the future. We're also in a close fight against Franz and Toro Rosso, and Racing Point, so a number of challenges. We've been focussed on growing, in terms of quantity, making up the numbers, it had to be done, but in parallel we need also to look for a bit stronger technical leadership and making the team stronger in that area where we were a bit lean at that level, so that's exactly what we've gone by restructuring our aero department with a mix of external recruitment and internal promotion. So, I'm not going to go into the specifics but we all hope it's going to support our best, all that there is to offer because aero department is a big department with very nice facilities, state-of-the-art equipment, so they need to know to deliver more.

Claire, Nico Hulkenberg has ruled out a move to Williams in 2020 and Nicholas Latifi is doing FP1 for the remainder of the season except for Abu Dhabi. Is that an indication of your plans for next year?
CW: No, the plan was always to have Nicholas Latifi in the car for these practice session that you're seeing him in, in the next couple of races and in Mexico as well. It's no clear indication. We've made it very clear in the media that we won't be making our driver announcement for that second seat for 2020 until after Abu Dhabi this year.

Franz, Pierre Gasly said yesterday that your car hasn't changed much since he's been back with the team - yet the results have been strong in the last few races. If what he says is the case, how do you explain the upturn in performance in recent races?
FT: Maybe he slept not so good here. The car made some progress because we came up with a lot of aero updates, and don't forget that also Honda also came with a new fuel, in Suzuka, which brought us a good performance advantage. Nevertheless, Pierre gets also more and more familiar with the car and with the team, and therefore he is showing a good performance and we are happy about this.

And you've finished in the points here for the last five years. Do you think you can do it again this weekend?
FT: I hope so. This is the target. It's not only to finish in the points. We should be really good in the points, to score a lot of points, not only one or two points. But we will see. Our competitors are very strong and it will become an interesting race.

Mattia, what's your analysis of last weekend's race in Mexico? Have you had a chance to look through what happened and how you can help yourself this weekend?
MB: Well, what happened? Certainly when starting on the first row it's always difficult somehow not to get the best result in the race but I think what happened is that first maybe we were not fast enough in the race, because if being faster they could not have undercut us. That's the first analysis. Generally speaking, sometimes to win you need to take some more risks. And risk to me means somehow brave and brave enough means that maybe when Albon stopped we should not have stopped with Charles, staying out. But in doing that means that we were pretty sure the tyres would not have lasted to the end by stopping at that time, which was wrong, wrong assumption. So it means that in terms of tyre modelling, tyres understanding, there was still some tuning that was required. So now, they're looking back at all the data. We are furthermore trying to improve our tyre model for a better understanding and that will give us in the future probably a better opportunity for a better choice.

(Frederic Ferret - L'Equipe) Question to Mattia. Your two drivers are fighting for the third place in the Championship. Is it an important thing for you? And the one who will finish ahead of the other, will be the team leader for next year?
MB: OK. What is important for us, at first is to confirm the second place in the Constructors', and hopefully we can do it here this weekend. What is still important for us is to add some victories for Ferrari team in the last few races. And I think very last is third place in the Drivers'. And then whoever will be... not important. With that said, the start of next year, not at all.