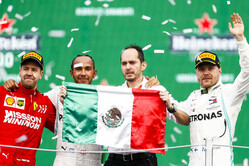 Q: Lewis, you've have had some pretty epic victories and a lot of them come through sheer aggression and excitement. This one was a very different victory it seems. Looking after these tyres like you did was immense.
Lewis Hamilton: Firstly, we've got to applaud this incredible crowd. This is like the best crowd I think I've ever seen. We've never seen anything like this. Today is an incredible result. I have to say a huge thanks to my team - Mercedes and our partners here. The guys have continued to work incredibly hard and stay focused. We came here thinking that we were on the back foot, knowing that it's a difficult race for us, tut we pulled through. I had a quite a bit of damage on my car, so the race was quite a bit of a struggle. I just kept my head down. It seemed like a long second stint, but ah man, I'm so grateful for today.

Q: Awesome, great to hear. It must a real mix of emotions. The last two years you come here and you haven't been on the podium but you clinched the championship. This year, you come and dominate and win but you have to wait a little bit longer for the championship?
LH: Yeah, I don't mind. I love racing, man, and I just take it one race at a time honestly. As I said, this is a race I've wanted to win for some time but it's always been a little bit tricky for us. So, I'm incredibly humbled by today's opportunity, for the car holding together as it did, and for the team being so sufficient and executing the best strategy. Just to hold up the Ferraris was not so easy at the end but I hope people enjoyed the race.

Q: Congratulations, go and enjoy this amazing crowd. Seb, I'm sure it's not quite the result you were after. You looked really exciting in the first stint. You were able to put in some really good lap times. I thought you were going to pop out behind Lewis and make it happen but you didn't quite have that?
Sebastian Vettel: Not really. I think surprisingly the hard tyres worked really well. It was a very intense race, because there was no break and obviously I had Valtteri behind me giving me some pressure in the final stint, before I could focus on Lewis in the front. But yeah, I think Lewis, he was just cruising for most of the second stint, up to the point that the attack was arriving and then I guess he had enough tyres left so... Yeah, I'm happy, because I think it was a good race, but I think here and there maybe with strategy we could have been a bit sharper. But overall, it's a great crowd.

Q: It's amazing, the support these guys give you must really mean a lot?
SV: Yeah... I didn't hear what you said!

Q: I said that these guys give you so much support. It must mean a lot.
SV: You can tell! I didn't hear what you said. It's incredible. It's one of the best races for that, so looking forward to the podium.

Q: Great job. Valtteri: I'll bet it's a bit bittersweet after yesterday - the issue in qualifying - getting winded is never a nice feeling. But the pace today, and your aggression was really coming through.
Valtteri Bottas: Yeah, I enjoyed. Considering yesterday it was a good result. Very happy about the pace I had in the race. The start was quite tricky, I dropped a place there, so I had to come back a little bit. Yeah, I don't think we could have done much more today from where I started, so looking at that it was pretty good.

Q: You seem really confident in the car. In the last few races you seem to have upped your game, which is necessary with a team-mate like Lewis. Are you feeling really good in the car? Is this promising for the rest of the season?
VB: yeah, feeling good. Definitely a lot better than the same time last year. So feeling like I have the pace and the confidence and happy feeling in the car. I just need to continue and I look forward to next weekend.

Q: Sebastian Vettel, our second-placed finisher. Great race by you, Seb. Couple of things: first of all, at the start we saw you flexing your muscles on the run down to Turn 1 to Lewis?
SV: Not really. I didn't see him. He came after the race as well and asked, but no intention to push him or anything. Obviously, as soon as I saw, I obviously got off and I tried to get in Charles' tow and I checked the mirrors on the right and the mirrors on the left and that's when I saw Lewis and then, you know, I tried to go right but before that point I didn't see him. We see quite well in the mirrors but there is still obviously an angle that you can't see.

Q: You said a little bit earlier to Jenson Button that you could have been a bit sharper on strategy today as a team. What did you mean by that? You pitted at half distance, do you think you left yourself too much to do?
SV: Not really. I think in the end... after the race it's always easy to say but I think we were confident that we split the cars, we covered both options. Obviously in Lewis' shoes and Mercedes' shoes they had nothing to lose so they might as well from that early to make it. And Lewis did well managing his tyres in the second stint, and just cruising up to the point where we arrived. It worked finally but neither them nor us expected the tyres to last that long. We saw a lot of graining on Friday and so did they actually, they saw a bit more than us, so it was a bit of a surprise that today we didn't have any and that made the difference. You might as well try, so it's a brave call. In the end if it works you look great, if it doesn't then you've tried. I think if it was so straightforward for them, the thinking of fitting the hard so early and easily making it to the end, then they should have pitted Valtteri as well, but you can see that obviously he stayed out with me, long, to try and make sure that you make the one stop work and you don't fall off any cliffs. As I said, we tried everything but ultimately... yeah, maybe we could have been a bit braver, but then it's a lot of unknown and you don't want to do anything stupid at that point. And second, I think you could see that in the race trim we were just missing a little bit of pace. Valtteri was closing in at the end of the first stint. Lewis was fairly easily closing in during the first stint as well. So I think it's also fair to say that they were just a bit quicker than us.

Q: Thanks. Valtteri we'll come to you in just a moment, but we're joined now by our winner Lewis Hamilton. Congratulations Lewis. Now, given the pace of Ferrari and Red Bull this weekend, how surprised are you to be sitting in the middle?
LH: I think probably for both of us it's a bit of a surprise. We came into the weekend... I can only talk about my side, and not having 'Bonno' for the first time in seven years and the challenge of having two new engineers step up into different roles and trying to keep the balance of pressure and make sure we deliver and ultimately make Bonno proud was not easy. We come to Mexico, we always struggle here with our tyres, last year we lost by like 60 seconds or something. I think we finished like fourth but we were a long way away from these guys and on Friday their pace, particularly the Red Bulls, their pace was quite stronger than ours. Seb went like eight or nine laps further than I could make the tyres go. But we just kept our heads down and tried to work on trying to get the most out of our car and it wasn't great through qualifying but the race pace, once we got through all the commotion at the beginning, he tried his best to...

SV: Not really. As I said, I didn't really try, I just didn't see you!

LH: I'm messing with you.

SV: But if I had seen you, yes, I would have tried.

LH: And then I obviously got torpedoed. I thought at some stage I'd get torpedoed by Max. And then after that trying to keep up with Seb was a real challenge. A first and third is a true showing of real strength and depth with our team and it's a real pleasant surprise really, because we didn't expect our tyres to go as far as they did. We didn't think we could manage a one-stop and we made it work.

Q: You said you were expecting a bit of action from Max early on in the race. Talk us through those opening corners?
LH: I actually got a really good start, so I was pulling up to Charles and Seb is coming across, coming across, coming across and I'm thinking 'I'm on the white line, I don't have anywhere further to go'. And he just keeps coming. So I had to avoid crashing with him, going on the grass. Avoid his wheels as well, otherwise I could have caused a big collision for him. Then I was surrounded by a bunch of cars, I braked into Turn 1, and all of a sudden Max is alongside me. If you've seen races before, I always leave Max a lot of space - it's the smartest thing you can do. But there wasn't a lot of space to give him space. I think he had an oversteer moment or something and then I got a massive hit from behind. Then I nearly took him out...

LH: Yeah. We were going through the corner, you were about to go into Turn 2, my back end came out and I nearly took you out and then we went straight over the grass. It was hair-raising.

SV: Ah, that's why there was such a big gap and there was Albon all of a sudden...

LH: Yeah, me and Max went through the grass together, came out and there were other cars coming by. I thought I was going to get hit by other cars. But I managed to get my bearings and keep my head down. I was not expecting to have that pace and to be able to keep up with the Ferraris but it worked and even with a damaged car. Obviously Seb went a lot further and I think so did Valtteri, he did a fantastic job to come from sixth. I thought I was going to struggle at the end with Seb, with 10-lap younger tyres.

LH: Maybe more than 10. But I just managed to save enough in the early phase while he was doing that long run, which I was able to utilise. Particularly those last seven laps were the important ones and I kept him behind.