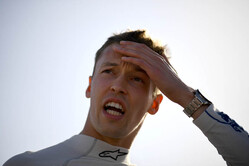 The Mexico stewards were out of the blocks quicker than a Valtteri Bottas start it seemed, as they hit Daniil Kvyat with a 10s time penalty just moments adter the Russian had clashed with Nico Hulkenberg on the last lap of the race.

While Lewis Hamilton was taking the chequered flag, further behind, as they exited the stadium, Kvyat made a last gasp attempt to pass Hulkenberg for ninth.

The pair clashed, causing the German to lose control and hit the barriers with the rear of his car, losing his rear wing in the process.

Kvyat went on to finish ninth, ahead of his Toro Rosso teammate, Pierre Gasly, but, seemingly, before the Russian had even climbed from his car the stewards had made their decision, hitting him with a 10s time penalty that demoted him to eleventh and Hulkenberg back up to tenth.

Without talking to either driver and relying on the video evidence, the stewards deemed that approaching Turn 16, Hulkenberg was in front of Kvyat. When entering the corner the Russian hit the back of the Renault, causing the car to spin and hit the outside wall.

This being a breach of Appendix L, Chapter IV Article 2 of the Sporting Code, Kvyat was hit with the time penalty and two penalty points.