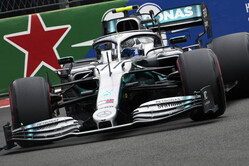 While Valtteri Bottas escaped from his Q3 crash without injury, that's more than can be said for the car, which is understood to have left the Finn suffering a 17G impact on hitting the Tec Pro barrier.

Though the car was extensively damaged, team boss, Toto Wolff is "90% confident" it can be repaired without Bottas incurring any penalties.

"We are 90 percent confident we can fix without any penalties," Wolff told reporters. "It was an unusual angle of impact so I think we got away with that.

"They are rebuilding it as we speak. We have to look into the detail but we have not seen any damage to the gearbox but we do not know if it is leaking."

While a change of gearbox would incur a 5-place grid drop, a change of Bottas would see the Finn start from the pitlane.

As it stands, Bottas is the only man who stands between Lewis Hamilton and his sixth title, the Briton needing to score 14 points more than the Finn this weekend if he is to wrap-up the 2019 title.

"The last run in Q3, the last corner I went a bit deep and went wider than I wanted and I just lost traction and went into the wall and at the end was a Tec Pro barrier, which was a bit nasty," said Bottas.

"It was a good lap since then," he added, "and I could have been fighting for third place.

"In the first few minutes, I felt a bit of pain in my right knee, I think it was a nerve thing but it is alright now."