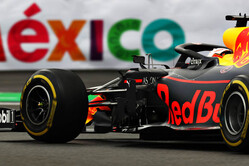 Charles Leclerc was quickest in this morning's final practice session, which like yesterday was compromised by the track being damp following overnight rain. Indeed, it was only in the final 13 minutes of the session that the drivers were able to switch to slicks.

Though qualifying, like FP2 yesterday, should be held in much improved conditions, it is expected that there will be further rain tonight and possible during the race tomorrow, which will only add to the teams' preparation issues.

Clearly, Ferrari is strong here, not only on the straights but in the twisty bits also, and while the main opposition appears to be coming from Red Bull, the weather could play into Mercedes hands.

On the back of its disqualification from the Japanese Grand Prix, the last thing that Renault needed was the cooling system "pollution" issue which sidelined both cars earlier.

In the battle for best of the rest, McLaren, Carlos Sainz in particular, looks strong, as does Toro Rosso, Pierre Gasly out-pacing his teammate despite a stomach bug.

Haas continues to struggle, while Alfa Romeo really needs a strong weekend but doesn't look likely to achieve much.

With the United States Grand Prix a week away, a number of teams are thought to be concerned at the lack of spares, a situation not helped by the changeable conditions, with Red Bull understood to be particularly affected.

Ahead of Q1, the air temperature is 18.3 degrees C, while the track temperature is 32.2 degrees. Other than being unseasonably cool it remains somewhat overcast, though the sun is attempting to break through, with a 10% chance of rain.

The lights go green and Russell gets things underway, followed, shortly after, by his Williams teammate.

As he starts his flyer, Russell reports that his tyre temperatures are still low. He subsequently posts a 33.152, with Kubica posting a far more sensible 20.313 moments later.

On his second lap Russell improves to 19.547, as Vettel is among the drivers heading out for their first run.

Grosjean is an early spinner at Turn 1, the Haas driver locking up the rear of the car and losing the rear end.

Kvyat goes quickest but is instantly demoted by Norris and then Raikkonen, the 40-year-old posting 17.626.

Bottas goes sixth (17.062), ahead of Raikkonen, Gasly, Sainz and Ricciardo.

Hamilton is one of several drivers to remain out, Albon is another. The Briton posts PBs in the final sectors but fails to improve on his previous best.

With 2:20 remaining, the drivers head out for the final assault.

Along with the Williams duo, the drop zone comprises the Haas drivers and Stroll, with Giovinazzi, Perez and Kvyat hovering.

Russell improves to 18th, as Norris goes 8th and Hulkenberg 10th. Both are demoted however when Kvyat goes sixth.

Stroll fails to improve and falls at the first hurdle, along with the Haas and Williams duos.

"Argh! I had no grip," complains Stroll.

"Unbelievable," says Grosjean, the Haas driver at a loss to explain to drop off in performance since this morning.

"At the moment everyone is on the soft tyres, but the crucial session will be Q2," says Pirelli, "when the medium tyre is likely to be the one to have." Indeed.

Sainz is first out for Q2, followed by Sainz and Gasly, all three are on mediums, as are the Mercedes pair and the Ferraris.

Kvyat posts 17.712 and Gasly 18.159, as it is revealed that the Russian and Ricciardo are to be investigated for a pitlane incident.

A 16.481 sees Hamilton go top as Bottas aborts his lap after running wide in the stadium.

Moments later, Verstappen splits the Ferraris with a 16.136, as Albon goes fifth, ahead of Hulkenberg and Norris.

As Perez begins his first flyer, the crowd roars.

"Sometimes it feels like the car is on the handbrake," says Albon, which is exactly what Verstappen said yesterday.

Bottas improves to fourth with a 16.398, just ahead of his Mercedes teammate.

Ahead of the second runs, Sainz, Giovinazzi, Raikkonen and the Toro Rossos comprise the drop zone, the latter clearly needing to switch to the softs as their medium pace isn't good enough.

Perez, in seventh, Hulkenberg, Norris, Ricciardo and the Alfa pair all sets their times on the softs.

"The car just wasn't great on that tyre," says Hamilton, as he asks if the others were on the mediums also.

The final assault gets underway and both Mercedes drivers stick with the mediums, while the Ferrari pair are now on softs, as are the Bulls.

Indeed, only the Mercedes pair are on the yellow-banded rubber. A bold move from the world champions.

Sainz improves from 11th to fourth with a 16.267, thereby demoting the Mercedes pair.

Gasly goes eighth and Norris sixth, but both are demoted when Bottas goes quickest with a 15.852 and Hamilton posts a 15.721.

Both Renault drivers fail to make the cut, as does local hero Perez.