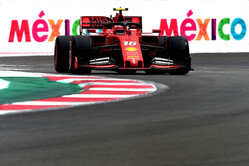 As was the case with yesterday morning's session, heavy overnight rain has left the circuit damp, though today the track is even more damp than yesterday. Indeed, the track is officially declared "wet", with predictions of further rain over the course of the day.

Following his crash in FP2, Alex Albon has a different chassis as a result of the damage sustained to the right-front of his previous car. At Williams, both drivers now have the new front wing.

Someone hoping that the rain returns no doubt is Lewis Hamilton, who was unable to match the pace of the Ferraris yesterday. Indeed, only Max Verstappen was able to keep Sebastian Vettel honest, though it remains to be seen today when Ferrari turns the wick up.

On a day when almost everyone had an off or lock-up at some point or another, it was interesting to note that Charles Leclerc had a particularly scrappy day.

Of course, the overnight rain mean that yesterday's rubber has been washed away which means the prospect of further incidents.

As ever, the midfield was where the fun and games were, with Toro Rosso and McLaren looking particularly strong, with Racing Point and Renault also in the mix.

Talking of Toro Rosso, Pierre Gasly is understood to be suffering a stomach bug.

Meanwhile in the Renault garage, Daniel Ricciardo's car is up on its stand after a hydraulics leak was discovered.

The lights go green and Norris is first out, his McLaren equipped with the mandatory Inters. He is followed by Grosjean, Giovinazzi and Kvyat.

As Sainz admits concern over his steering, Magnussen, Russell and Norris suggest it is not yet time for slicks. As if to prove the point Albon runs wide and over the grass, the Thai driver the first to post a time (28.975).

Hamilton heads out, leaving Ricciardo, the Racing Points and Gasly as the only 'no shows'.

"Just had a massive drop in power," reports Hamilton. Despite it however, he posts a 27.852, while teammate Bottas goes quickest with a 26.781.

Hamilton is advised that his main time loss is half-a-second in the middle sector.

Making up for lost time, while others pit and some refuse to play, Albon has completed 10 laps.

Even the most experienced are caught out, as veteran Raikkonen runs wide at Turn 12.

In the Ferrari garage, Vettel's car is up on its stand, surrounded by some anxious looking mechanics as they seek to resolve a sensor issue. Similarly, at Renault, Hulkenberg's car now appears to have an issue.

"We appear to have the same issue on both cars," reports Renault, "a pollution of one of the cooling systems, which requires careful cleaning before qualifying. Our guys are working hard to fix it but we're unlikely to go out in this session."

After 36 minutes, only 8 drivers have posted times, with all running on Inters.

In the Toro Rosso garage, Gasly is looking likely to get into his car for the final 18 minutes.

Bottas is back on track, on Inters, while Raikkonen is the first to make the switch to slicks (softs).

Having gone quickest in S1, Bottas reports that he's coming in for slicks, his countryman seemingly having made the right decision. Indeed, Raikkonen goes quickest in S1. Maintaining the pace in S2, he crosses the line at 21.673, 4.445s quicker than the previous best posted by Verstappen.

With 13 minutes remaining, it's about to get very, very busy.

As Bottas pits for mediums, teammate Hamilton is on track on Inters, having headed out before the slick call was made.

Bottas goes quickest with a 19.101 as more and more drivers are appraised of Raikkonen's pace on the slicks.

Albon goes quickest in S2, the sector that best suits the Red Bull. Maintaining the pace in S3 he goes quickest overall with a 13.370.

Hamilton runs wide and over the grass in Turn 1, the Briton on the mediums.

Vettel improves to second with a 17.586, despite a poor final sector.

Magnussen reports that his front wheels are "hopping" at the exits of corners. "Hopping?" queries his engineer.

A 16.638 sees Sainz go quickest, while teammate Norris is currently down in 14th.

Though quickest in the final sector, Albon remains 0.2s off his teammate's pace.

On the softs, Bottas goes quickest in S1. At the line the Finn posts 16.259, only managing a PB in the final sector.

Hamilton goes second with a 16.381, the Briton posting PBs in all three sectors.

Albon goes quickest in S1, but aborts his lap after coming up behind a slow Williams.

Vettel goes quickest in S1, but can only manage a PB in S2. At the line he posts 16.172 but is instantly eclipsed by his Ferrari teammate who stops the clock at 16.145.

Kvyat is eleventh, ahead of Raikkonen, Stroll, Giovinazzi, Magnussen, Grosjean, Russell and Kubica, with neither Hulkenberg nor Ricciardo posting a time.