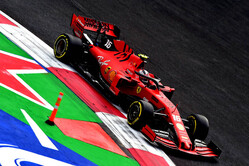 Ahead of today's second session, the air temperature is 20.1 degrees C, while the track temperature is 38.3 degrees. It is bright and warmer than earlier.

However, taking a leaf out of Mercedes book, the Ferraris didn't run the red-banded soft tyres, preferring to stick with the mediums, while those around set their best times on the softest compound available.

Indeed, through the speed-trap, Leclerc was 14 km/h quicker than Hamilton.

Romain Grosjean had the dubious honour of being the first driver to fall foul of the track limits sensors at Turn 11, while Lance Stroll brought out the red flag when he sent into the barriers sideways as the exited the stadium.

Running was compromised in the opening half of the session due to the track being damp from an overnight storm, with further rain expected for the remainder of the weekend. Indeed, there is a 20% chance of rain over the next ninety minutes.

Having handed his car over to Nicholas Latifi earlier, Robert Kubica gets his first taste of the Autodromo Hermanos Rodriguez this afternoon.

The lights go green and Giovinazzi leads teammate Raikkonen out into the sunshine. They are followed by Russell.

Giovinazzi gets things underway with a 20.600, with Raikkonen posting 20.277 moments later. Interestingly, the Finn is on hards and the Italian on mediums.

Norris (mediums) goes quickest with a 19.600, as Ricciardo goes fourth on the hards.

The Ferrari duo are among the early risers, both on mediums.

Vettel posts 18.697, with Leclerc stopping the clock at 34.122 shortly after having aborted his lap in the second sector.

"The torque delivery is not very good out of the corners at slow speed," reports the Dutchman.

Bottas is the first of the Mercedes pair to appear, as Hamilton and Hulkenberg remain the only 'no shows'.

An early spin for Leclerc at Turn 1, a corner that caught out a number of drivers in FP1 and continues to do so.

Shortly after, the session is red-flagged when Albon goes off and into the barriers at Turn 7.

"Sorry," says the clearly breathless Thai driver, as the replay shows him carrying too much speed into the left-hander and consequently losing the rear. As the car is manhandled on to the truck the right-front corner appears to have suffered the worst of the damage.

The session resumes with just over an hour remaining, but there are no immediate takers. Eventually Sainz heads out, followed by his McLaren teammate and Hamilton, the Briton making his first appearance of the afternoon. Raikkonen is also back on track, the Finn the first to try the softs.

In an attempt to hide the front wing on Albon's car from prying eyes (and lenses), the marshals use a piece of white material that really isn't up to the job.

The cameras capture Sainz riding the kerbs as Bottas pins in Turn 12 as he is about to enter the Stadium section. The Finn is lucky not to collect Sainz who is running behind.

Indeed, despite a couple of offs, Sainz has improved to fifth with an 18.584.

The lock-ups and off continue, with both Renault drivers having moments along with Kvyat and Giovinazzi.

Vettel and Leclerc switch to the softs for the first time. The Monegasque goes quickest in S1, maintaining the pace in the second sector. At the line the youngster posts 17.072 to go top, as Vettel begins his first flyer.

The German goes quickest in S1, and maintains the pace in S2, despite encountering a slow Alfa Romeo. At the line it's 16.067, which is sure to cause some anxiety in the Mercedes and Red Bull garages.

Ricciardo improves to eighth with an 18.380 on the softs.

Judging by the times posted on their second flyers, the softs are only good for one hot lap.

Grosjean goes cross country, the Frenchman no fan of this track.

Switching to the softs, Verstappen splits the Ferraris with a 16.722, just 0.115s off Vettel's pace, which will be heartening for the youngster and his team.

Bottas, also on the softs, goes fourth with a 17.221, as Perez makes a complete hash of The Esses.

"The turbo is making some really weird noises," reports Magnussen. The Dane is told to pit.

Hamilton begins his qualifying sim, but by the end of the opening sector he is already worryingly off the pace. At the second split he remains over 0.5s off the pace, finally crossing the line at 17.570 to go fifth, 0.963s off the pace. Even in the tight, twisty stadium section, where the Mercedes should shine, the Briton loses ground.

"Lance, do you think we'll get much out of another lap?" "No," comes the reply.

The qualifying sims out of the way, attention turns to the long runs on high fuel.

Perez is told that his front tyre temps are still too low and that this could lead to graining.

Talking of graining, the front and rear lefts on Grosjean's Haas are in a terrible state. "I can't drive anymore, the rear left is starting to go," says the Frenchman.

Through the speed-trap Vettel is quickest (223 mph), ahead of Leclerc, the Haas pair, Perez, Raikkonen and Stroll. Though the Silver Arrows and Bulls don't make the 'top ten', the Alfas and Haas' are at the wrong end of the timesheets despite their straight-line speed.

As ever, the midfield is where it's really happening, sixth-placed Kvyat through to thirteenth-placed Ricciardo covered by by half-a-second.

Like his teammate, Magnussen is struggling, he runs wide in Turn 1 and on rejoining is lucky not to collect Vettel.

Bottas is told that he's running a similar pace to Leclerc and Verstappen, however, while the Monegasque, like the Finn, is on softs, the Red Bull driver is on mediums. Bottas subsequently switches to hards.

Hulkenberg is told that his fronts are looking good "compared to others". The German is currently ninth.

"The last change e made with the engine gives me much more lag," reports Verstappen.

Leclerc continues on the softs, while Vettel and Verstappen are on mediums and Bottas on hards. Hamilton pits for fresh softs.

"The tyres are completely gone," says Leclerc after just 12 laps on his softs. He pits and switches to mediums.

Shortly after, Vettel pits and switches from the mediums to softs.

The cameras pick up on Hamilton still struggling, the Briton getting all out of shape in The Esses.

"What is that, it feels like a massive handbrake," declares Verstappen, as Leclerc spins (again) after running over the kerbs at Turn 7.