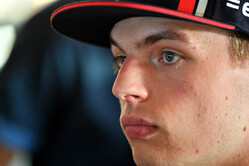 Max Verstappen has been handed a three-place grid penalty for not heeding the yellow flags in Q3 following Valtteri Bottas' crash.

In addition to studying the relevant video, audio and telemetry evidence, the stewards heard from Verstappen and a Red Bull team representative.

The video, audio and telemetry evidence clearly showed that Verstappen attempted to set a meaningful lap time and failed to reduce his speed in the relevant marshalling sector, contrary to the Appendix H, Article 2.4.5.1 b) as well as, the requirements set out in the item 9.2 of the race director’s event notes (version 3) in breach of Article 12.1.1 I of the FIA International Sporting Code.

Verstappen admitted that he was aware that Bottas had crashed and saw the car on the left hand side of the track, but was not aware of the waved yellow flag. He also admitted not reducing his speed on the yellow sector.

The stewards noted from the on board images that the waved yellow flag was clearly visible and was shown with enough notice. Indeed, the previous driver, Sebastian Vettel, reduced his speed significantly as per the regulations.

Taking into account all the available evidence and the statement from Verstappen, the stewards imposed a drop of 3 grid positions and 2 penalty points.

Verstappen's cause was not helped by comments made at the post-qualifying press conference, indeed it was only after he said that his failure to slow didn't matter that the stewards appeared to take action.

Asked why he didn't back off if he saw the yellow flag, the Red Bull driver replied: "It doesn't matter, does it?

Told that it might, if the FIA was to investigate, he said: "Well, then delete my lap. The second. The other lap was fine as well."

Minded that this was about safety, he said: "Do we have to go there? To safety? I think we know what we are doing - otherwise we would not be driving an F1 car. It's qualifying and, yeah, you go for it. But like I said before, if they want to delete the lap, then delete the lap."