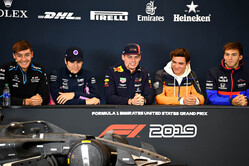 Gentlemen, you can see the 2021 car sitting in front of you. I'd like to start by asking you all about it, the car and the general direction of Formula 1 in a couple of years' time? Max, if we can start with you, please?
Max Verstappen: It's a bit small!

Lando Norris: I was going to say that! That's my joke!

MV: Yeah, also for us it's still early days. I haven't really looked through all the things - I mean it's just announced. At the end of the day, it doesn't really matter how it looks like or whatever, as long as it gives us better racing and we can follow better. Of course we want to be within two seconds, three seconds of what we are doing now, definitely, because if it's going to be about four or five it's not what we want, because then it feels a bit too slow. But I think this is just the start of it and I'm sure that teams will come up with a little bit of a different look as well, so let's just find out over time how it's going to work out.

Ross Brawn has just said that lap times will be similar to 2016.
MV: Yeah, I guess... To be honest I didn't really enjoy driving the cars as much back then as I do now, but of course you have to find a middle way in terms of what you want with following and stuff like that. Anyway, throughout the season the cars will improve.

OK, let's get some other thoughts: George?
George Russell: Yeah, from my side it doesn't really matter how it looks or the speed of it as long as we have great racing. I think that's what we all want. Obviously the weight is heavier which I think is not ideal for any of us. I mean, even driving like a Formula 3 car it was really fun to drive but it was much lighter than what these Formula 1 cars are. But as long as it improves the racing and brings the field together that's all I care about.

Lance?
Lance Stroll: Yeah, not much more to add really. I think the main thing is to focus on the racing. We need to be able to follow closer to one another and to improve the wheel-to-wheel racing, the show for the fans, and I think for us drivers, too, it will be very exciting if we can see closer racing. Hopefully it levels the playing field as well. If we can see the gaps reduced to the top teams and there are more opportunities for the midfield teams to score podiums and to fight for positions further up the grid, that would be exciting.

Lando?
Lando Norris: I think it's pretty much been covered. As they all said as long as the racing's better and we all have a chance to fight for wins in different races and as teams we can all fight for being a strong constructor, I think that's the key thing. That's about it.

Do you like the look?
LN: I would change the paint scheme slightly! Apart from that, I think it's alright. I mean, I've seen the renders our designers are designing and it looks pretty cool. I don't really mind too much, that's not what I'm fussed about. I'm just fussed about the racing and having fun and being able to follow cars closely and just enjoy racing more than what we do now.

And Pierre?
Pierre Gasly: Well, I agree with all of them, so not much to add.

OK, well Lando, a frustrating race for both McLaren drivers in Mexico. What did you learn from your various problems in Mexico and do the temperatures we're experiencing here in Austin worry you?
LN: Yeah, not a great race for us as a team, especially after our qualifying position and a good chance to score some more points. I think there are obvious things... I think my race was put down fairly quickly with the pit stop. There's something that's easily known and understood in terms of what the problem was, but fixing it isn't something that is going to happen overnight and it doesn't happen often at the same time, so it's not like we're worried about pit stops or anything, it's just we can be a bit unlucky and this time it was the first pit stop that I had where I was a but unlucky. I'm not so worried about that; the team have got solutions in the pipeline, which is a good thing for us. We just have to look on to this weekend. I wouldn't say we are worried about the track temperatures or anything, it's just how it is. It's similar to Barcelona in pre-season. It might be a bit more difficult to get the tyres in the right window and so one, but I'm hoping it will play a little bit more to our strengths rather than our weaknesses.

And an opportunity to reflect on your first season in F1. What's the take-home message from this year for you?
LN: Meh.

MV: You sound like a sheep. I think there is a meme incoming now.

LN: I'm happy with bits of it. There are bits I'm not so happy with. I've not made any huge mistakes. I've not crashed a lot, I've not done anything stupid. But as a racing driver, and I'm sure all drivers on the whole grid would say the same, there's always room for improvement and things they want to do better. So, I am happy, I think 90% of the things I've done, I think I've done them reasonably well. It's just the smaller things - you mess up a qualifying lap or you don't progress enough on how you work on the set-up with the engineers as much as you want. It's just putting all the small things together. A bit of it comes with experience, but a bit of I don't think I did a good enough job in. I'm happy, it's been a good year, a very enjoyable year, but I want to make sure I come back next year and already in the next races in slightly stronger form.

Thanks Lando and good luck this weekend. Pierre, how's your health?
PG: Really good. I think that's about 20 times people asked me since I arrived in the paddock today. It was a rough time last weekend, but everything's perfect now.

How tough was that race? You finished ninth but you really weren't...
PG: Yeah, it was probably one of the most challenging race weekends I've had...

PG: No, the seat was clean - nothing wrong with that. It was pretty tough from Saturday morning onwards, just in terms of energy and trying to keep the focus. It wasn't an easy one but I'm happy we went through it. We managed to get the best result we could out of the weekend. Pretty strong qualifying and race, even though it wasn't easy, but yeah, it was definitely a challenging one.

You say strong qualifying. Both Toro Rossos got into Q3. How much progress have you made with the car recently?
PG: To be fair, the car is more or less the same as it was in the last couple of races, since I rejoined. But I think it's just trying to extract the maximum from what we have and trying to find the set-up directions that suit tracks and what I need from the car. I must say I'm really happy with the way we're working with the team. They are providing me with everything I need so we can extract everything from the car. So far we are doing well. We can always do better and we'll try to keep that form in the next three races.

You say the team is giving you everything you needs. Confidence looks high. Are you driving better now than when you were with Red Bull Racing?
PG: Not really. I didn't learn or forget how to drive in a couple of months. It's just a matter of putting everything together. As I said, I'm just focusing on the job to do with Toro Rosso. I think we are doing pretty well. There are always things we need to focus on and improve and that's what we need to focus one.

Lance, if I could come to you now. Belated happy birthday. Turned 21 on Tuesday. What have you done since Mexico?
LS: I mean, just been laying low and enjoyed my birthday. It was nice... I went for dinner and was able to have my first drink in America! That's a real breakthrough. First time ever in the United States. So that was a lot of fun - but in moderation, looking forward to this weekend. I'm a professional athlete, so I've got to be in the best shape I can be for the weekend - and here I am.

Now, it was a competitive showing by both Racing Points in Mexico. Was that track-specific or are you really starting to add performance to the car?
LS: A bit of both. I didn't have the best weekend myself. It was really my team-mate who had a solid weekend. On Saturday and especially Sunday I had a scruffy qualifying session and then my race was going well until the second stint where I got a lot of lapping events, graining etcetera. Unfortunately, it didn't go our way but we definitely had potential again to score points and it's looking that way over the last five or six races since we brought the upgrade in Spa. That's really positive. Looking good for the next three races.

George, coming on to you. The team has been introducing new parts in recent races. How much better is the car to drive now than it was at the start of the season?
GR: I think the upgrades we've brought to the car recently, it's more been looking into 2020. We knew that it's not going to necessarily unlock a lot of performance on the car as it is now - but it's definitely looking promising going into next year. Overall, the car is definitely nicer to drive. I mean, at the start of the year it was not nice at all, let's say, and it was pretty tricky just to get around a lap. But we've done a good job to fine-tune the balance, just to make it a nicer car to drive - but now we need to rely on the engineers back at the factory to bolt some more downforce on it.

And what about your own development as a driver this year? You said you wanted to learn out of the spotlight, which you've been able to do - but what do you take into year two next year?
GR: Similar to what Lando said. I think there's things I've been happy with, things I haven't been... just experience really. The little things that you only improve on, race by race: understanding the tyres; the starts. It's pretty tricky starting at the back of the grid, with all the cars around, a massive lack of downforce. Even less downforce than what we've got, let's say. Just little bits and bobs here and there. I think I'll definitely be a better driver into next year.