Hamilton moved by texts from Alonso and Dennis 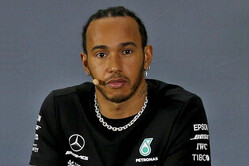 Still basking in the afterglow having secured his sixth world championship title, Lewis Hamilton has admitted to being moved by the congratulatory texts he received from mentor Ron Dennis and former teammate Fernando Alonso.

"Seeing Ron's text, really touched me inside," the Briton told reporters at Interlagos today. "I met him when I was ten years old, and he saw something in me that no one else did except for my dad.

"He gave me an opportunity to showcase my abilities and to learn and to grow," he continued. "Without him, I most likely wouldn't have made it to F1. I would have fallen away due to a lack of finance and I would have been leapfrogged by a bunch of individuals who had more money to back them.

"So I am forever grateful to Ron and always have love for Ron. And I hope he feels some sort of pride. He said how proud he was, so I hope that he can share and feel that he is just as much a part of this as anyone."

"I got a text from Fernando as well, which was pretty amazing. I was really grateful for that. We have been through a whirlwind of experiences together over the years and, in all honestly, I have always had respect for what he has achieved and his ability, and also seeing his growth through his period of time at McLaren."

The Briton was also moved by Sebastian Vettel's actions in Austin, who, despite retiring from the race with a broken suspension, purposely sought him out just before the podium ceremony in order to congratulate him.

"Recognition is not something that drives me," he said, "but it definitely is an honour when you have other drivers, particularly like Seb, that you respect so much for their ability.

"Over the years you have commented on their ability, you have belief in their ability and you've then built a rapport that is constantly growing. And for them to take a moment and show that bit of respect is amazing.

The Briton was also keen to pay tribute to his personal hero, Ayrton Senna.

"Superman, he was my favourite superhero, I wanted to be Superman," he said. "I saw Ayrton doing what he was doing, and the way he stood up for himself, and as a young boy, in Stevenage, I was constantly confronted with bullying, it was great to see someone standing up for themselves, standing up for their beliefs.

"His never give up attitude. His aggressive driving style he had. And his sheer skill was to be admired and that inspired me.

"In terms of his legacy, it still stands, he is viewed as one of the greatest drivers of all time. He moved a whole nation, I can't think of another driver who has done that, maybe Fangio has.

"If you look at Princess Diana when she passed away, how many people came out that day, it's pretty much the same here when Ayrton passed. It was huge for the country but also around the world."