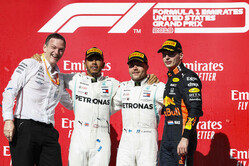 Q: Valtteri Bottas, pole position to victory and you've just beaten on the greatest drivers of all time in Formula 1 history. You must be so satisfied with that victory?
Valtteri Bottas: Yeah, it's a nice win. Feels good. It just felt very good since yesterday, the car, and yeah, we had a strong pace so we were able to get the win. It was the only I could really focus on and do this weekend in terms of the championship, but obviously it was not enough and Lewis got the title...

Q: You weren't lucky with the traffic. Was there a point where you thought 'I might not win this now'? You really had to come back at Lewis and his pace was amazing.
VB: Yeah, I wasn't quite sure which strategy was going to be ending up the better one, but luckily my pace was good so I could make even that two-stop happen, which was not planned initially. Yeah, we both had some traffic here and there.

Q: Have you got a quick word about Lewis and for Lewis?
VB: Yeah, obviously big congrats to him. I personally failed on my target this year, but there's always next season. But he deserves it. He had some season.

Q: OK, we're going to talk to the six-time world champion. He had a great second place today as well. Lewis Hamilton, congratulations, six times a world champion. You're one clear of the great Fangio and you're one behind Michael Schumacher, bless him. How does that feel? What's going through your head?
Lewis Hamilton: It's just overwhelming if I'm really honest. It was such a tough race today. Yesterday was really a difficult day for us. Valtteri did a fantastic job, so huge congratulations to him. Today I really just wanted to recover and deliver the one-two for the team. I didn't think the one-stop was going to be possible but I worked as hard as I could. I'm just filled with so much emotion. I have my whole team here, everyone back at the factory. I've got my mum and my dad, my step-mum and my stepdad here, my uncle George and my aunt from Trinidad, and all the family back home obviously. It's just an honour to be up here with those greats.

Q: Great start: you went around the Ferraris, so now you've put yourself into nice championship position. You could have put your feet up, but you just never give up do you?
LH: My dad told me when I was like six or seven years old to never give up and that's kind of the family motto, so no. I was pushing as hard as I could. I was hopeful that I might be able to win today but it didn't have it in the tyres unfortunately.

Q: How far can you go? How many championships? Just where can this end?
LH: I don't know about championships but as an athlete I feel fresh as can be right now, so I'm ready for these next races, we won't let up, we'll keep pushing. I've got to say a big, big thank you to all team LH around the world, everyone that has come out here this weekend to really make this event what it is, and also to all the Brits and people with the UK flags supporting me this weekend. Thank you so much from the bottom of my heart.

Q: Congratulations once again. Max, you kept the great Mercedes team very honest today, you pushed like crazy, but in the end the strategy didn't quite work out for you?
Max Verstappen: Well, it didn't work out but I think we did the best we could. They were just a little bit faster today. I tried to stay close in case something happened. For us it was a very good race. It was fun, I could still see the cars ahead of me and I think we had quite decent pace today.

Q: Yeah you did. Your pace was relentless. We thought you were going to have a chance to catch and pass Lewis right at the end. Was that in your mind too?
MV: Yeah, but there was a yellow flag on the back straight, so I couldn't use the DRS. Otherwise, I think we could have been second today, but nevertheless still good to be on the podium.

Q: And a quick word about Lewis?
MV: Yeah, of course very impressive. Yeah, what else to say? He's just doing phenomenally. He has a great team behind him, and, yeah, I hope we can take the fight to them next year.

Q: Valtteri, many congratulations, you nailed it this weekend, winning from pole position. Did you have any concerns during that race?
VB: Thank you. Obviously, a really good weekend, some solid progress since last year on a track I struggled with a bit. So yeah, obviously, as an individual race weekend, really pleased. Crossing the line really made me happy, because it was not an easy race. Even though the start went as planned, it was strong, also the first stint. But for me, Plan A was to do one stop, but Max pitted quite early, moved to two stops, so I had to try to cover him and then I went for two stops as well. Lewis stayed long, he tried to do one stop and one stage I worried that it was going to be a better strategy for him. All I could was focus on my every single lap, corner, trying to perfect everything, you know, with the traffic, all that, trying to minimise the losses and maximise all the gains I could. Then it was all about seeing towards the end of the race where we are. And my pace was good today and at the end I could catch Lewis and have some good fighting with him on track, which I enjoyed, and it was a good feeling to get ahead and to win the race like that it feels good when it doesn't come easy.

Q: Well done Valtteri, second win in three races, very strong end to the season for you. Max, coming to you: without that yellow flag at the end for Magnussen might you have had a go for second place?
MV: Yeah, absolutely. Because of that you have to lift off, otherwise I would have definitely gone by. But that's how it is. Sometimes those things happen. Overall, we had a really good race. I was just struggling with some weird oversteer in the car. Initially, they said it was my front wing, which had a little bit of damage but after the race I looked at the car and I was missing a big piece of my floor in front of the rear tyre, so that definitely cost me a lot of lap time today. I don't know when it happened but already quite quickly into the race I had this weird behaviour from the car, which I had not felt before. So that's a bit unfortunate and otherwise I think we could have been stronger today. But still, to be on the podium here after a very positive weekend in general I think was a really good achievement for us.

Q: (Abhishek Aggarwal - Indiainf1.com) My question is for Max. As you finished third today and in the championship points you are closing the gap now, do you think with two races remaining you can pretty finish ahead of the Ferrari driver and finish the gap and close in at three?
MV: I think the gap to third is quite big. It might be a little bit too big to close, but let's see. Today was good for that. But of course my last few races we lost so many points, that was not ideal. I expect we will be competitive in the last two races so let's see how it will all work out for us. It is of course always better to finish third than fourth or fifth, even though I think everybody wants to be first, but we will try everything we can.

Q: (Scott Mitchell - Autosport) Valtteri, I guess you knew coming into this that it would be unlikely that you would remain in title contention, so the fact that Lewis has wrapped it up here, does it take the sting out of that to win but also win in the manner that you did and beat Lewis on track in a straight fight?
VB: This weekend, winning it was the only thing I could do to try and maintain the title hopes and delay them. Obviously I did my part, which feels good, but Lewis was strong this weekend, as he always is, so he got some solid points and got the championship. I've got mixed feelings, really. As an individual weekend it was strong but then, on the other hand, I felt this year being best of the rest it doesn't feel good. But it always need a little bit of positives as well, you know. It's my best season in Formula One so far, so that's good, and looking at other positives, I've made huge gains in many areas, in terms of race pace and everything. But yeah, winning the race this way, Lewis still... I'm sure he really wanted to win this race, to win the title by winning the race, I could stop that and that feels good, obviously. But I just look forward to next year - it's a new opportunity.

Q: (Luis Vasconcelos - Formula Press) Valtteri, the first time you passed Lewis it was pretty straightforward, there was a huge pace differential. The second time you had two attempts: the first one you had to go wide and the second one you made it. Can you talk is through those last two attempts?
VB: Yeah, I was closing in, there was also some traffic also ahead. Lewis had a bit of a mistake in Turn 11, so I could suddenly get this first opportunity. He covered the inside, so I had to take the outside line, although I was ahead, but he braked very late, so eventually I had to run off the track to avoid the collision, but it's fine because if I was at his position I would have done the same, to defend as well as you can, so I'm fine with that. The other opportunity: again I think he went a bit wide on Turn 8 or 9, so I could get very close before the back straight and then it was much more straightforward. Again, I had good momentum out of exit of 11, got the tow and got him. So, then, after that, it felt like job done and tried to get car home without mistakes.