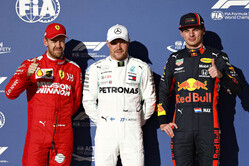 Valtteri, congratulations, man. That's got the team worked up, to get a pole position today. It looked a bit unexpected yesterday but you're starting on the front row.
Valtteri Bottas: Yeah, really happy about that. It was a nice lap in the beginning of Q3. You rarely get those kind of laps and on a track like this it's a good feeling. Yesterday was tricky, there were many things not quite right with my car but we managed to find all the reasons and we did good work this morning with finding all the details and I could just find the places I needed to really focus on and, yeah, I knew how to put it together, but to put it together, it was a nice feeling to actually do it in Q3.

you nailed the first lap in Q3, conditions looked like they got worse. Was it very tricky at the end?
VB: The last run there was a bit less grip overall. Sector 1 I was already losing one or two tenths. I'm glad no-one could improve at the end and I couldn't either, so happy days.

I'm going to take a bit of credit for buying you that coffee this morning. You owe me one, but congratulations, well done. Sebastian, lining up on the front row, it's a long run up that hill. How are you feeling?
Sebastian Vettel: I think it looks a shorter distance on the inside, no? I guess that's what I have to say, being second. No, congrats to Valtteri, obviously it was very exciting because we were all so close. I thought I had a little bit more. I left some in the high speed for the last run, but in my final run when I got there I was already a little bit down. I had two decent laps. There was always... one hundredths, you know, there is always somewhere. But overall, happy, let's see for tomorrow. Hoping for a good start and then for a good race.

I guess the main thing for you guys and the advantage comes down to the first lap and you'll try to use that extra speed you've got on the straight?
SV: Yeah, it's not that long and part of it is uphill, but we will see. I hope to have a good start off the line, which will be crucial, and then we will see where it takes. Obviously all of us are on the medium tyre, so nobody has an advantage there and then, yeah, it's a long race. We will have a busy race tomorrow. The first lap for sure is important but there is a lot of racing after that.

Max, P3, I know you're not going to be happy with that but further up and it puts you in the fight.
Max Verstappen: Absolutely. I think for us on this track to be that competitive was a very good result. Qualifying was just very tight.

And I guess the race... you looked very strong yesterday. Are you going to be in this fight all the way and pushing?
MV: Let's see. Normally we are quite good in the race and also now this time, even compared to last year, we were much more competitive in qualifying. Of course that gives us a lot more hope for tomorrow, so let's see what's going to happen.

Many congratulations Valtteri. Fifth in Q1, sixth in Q2 and then that brilliant pole lap in Q3.
VB: Thank you. Yeah, it definitely felt good putting that lap together in the beginning of Q3. After yesterday it was not an easy day to approach as I had a difficult day yesterday. Luckily, we found many things ion the car that were no quite right and also the set-up direction we changed completely and it felt a lot better this morning. Then I was just focusing on the things that matter and the places I needed to improve. So I had a very clear vision in my mind of how to do it but it was then down to actually doing it and it felt good to have that lap in Q3. Even though Q1 and Q2 were a bit off I knew it was somewhere there and I managed to find it.

Now, let's look ahead to tomorrow. You have to win this race to keep the championship alive. Are you happy with you car's long-run pace?
VB: I think as we have seen recently, normally on Sundays we are competitive. So, it's obviously very good starting from pole here. Some corners are quite to follow for the cars behind. I believe we have the pace for that and that's going to be the only thing in my mind for tomorrow. Now, you know, only a very, very small part of the weekend is done. The big part that matters is tomorrow and I need to focus on that.

Many congratulations Valtteri. Forty-three per cent of the races here have been won from pole. Sebastian, your 100th career front-row start. How satisfying is that?
SV: Gosh, I'm getting old. Obviously it was a very nice session, it was really fun to drive the car thus afternoon, but if you are so close to pole and just on the wrong side of it then I guess Valtteri had a bit more fun. It was OK. I don't know, what was the gap? It was very small, like one or two hundredths. So that is always there. I had a very good first lap and I had some margin maybe in the last sector where I was maybe taking it a little but too conservative, making sure that I finished the lap, set the lap first and then improve on the second lap. Unfortunately, I didn't improve, so my plan didn't quite work. Overall, it was good. I think we will have a strong race tomorrow. The car felt a lot better today than yesterday, which is also what we needed, so let's see what happens tomorrow.

What are the tactics on your way to Turn 1 tomorrow. Do you think the man next to you might be a little bit tentative because of the championship? Are you hoping that's the case anyway?
SV: I don't know, I'll just pass him and then we'll see what happens! If he's thinking about it then I have a good chance. We'll see. Obviously it's a long race. The first lap is important but we have a lot of laps after that. But if I can pass him, I pass him.

Max, you were the only one in the top three to improve on your final lap in Q3. You actually said over the radio that you might have gone a little bit too early on that final lap. Do you think it cost you any time?
MV: No, I just questioned if we were going a bit early but they just said we were ahead of the train compared to the Ferrari and Mercedes cars, so that was it.

And just tell us about that second lap. It is so close between the three of you. Have you been able to pinpoint where the time is, where you might have been able to get pole position?
MV: Well, I think in general Q3 was a bit more of a difficult session than Q2, for example, where I found the grip was maybe not the same - but of course that's the same for everyone. It was just a bit harder to get your lap out and yeah, in general it was just very positive for us in qualifying to be that close. Compared to last year we made a really big step forward and, anyway, now the last two races, I think, we have been a lot more competitive. So that is very positive. I think we are definitely improving and learning, and also looking ahead for next year, I think we are definitely going in the right direction. And yeah, in general very pleased. I think the whole weekend, we had quite a smooth weekend. I didn't really have a lot of trouble with the set-up or whatever. So, to be here in the top three, of course I would have liked to sit in the middle bit still, I think it's been very positive.

(Christian Menath - motorsport-magazin.com) Question for you Max, could you please talk us through the situation, I think in Q2, Q3 with Lewis? It was a pretty close one.
MV: Yep. So, we were all lining up to do our lap, or to get to the last corner, and I think it was Seb, the first Ferrari, then Charles and then I had Dany in front of me and we were all just slowing down to make space, and Lewis just drove by like nobody was there and didn't care. So I was like: well, if you don't care, I don't' care. So, I want to get my position back. I mean, everybody's just respecting each other at that point, just to start the lap. That's why it was such a close call.

(Abhishek Aggarwal - Indiainf1.com) Question to all the drivers. So, in the first three practice sessions we heard from all the drivers the track was a bit bumpy. We see lock-ups and cars being spun. So, in the race tomorrow how important is the tyre management, and have you thought about any other strategy to preserve tyres? What are your thoughts about that?
VB: I think with the bumps here, just the main place where it can really affect your race, if you have big lock-ups into Turn One under braking. Those are quite big bumps - but normally, even though, if you lock the wheels, you can recover. So, I don't think it's going to make like a massive difference. Every track, there's tricky points, tricky places that you can really damage the tyres and, obviously, coming into the weekend and in the weekend we've done all the analysis already for the long runs in terms of, in theory, where are the best places to preserve the tyres, and where to be slightly cautious at times, when you can, and so on. So business as usual, I would say.

Sebastian, how much worse are the bumps this year, compared to last year?
SV: A lot worse! I think the ground is the problem here, it moves, for some reasons. I don't know what they installed under the track when they were laying the track but yeah, I think they are aware. I mean, they tried everything. They brought some people out last night to grind parts of the track again to try and make it better for us - but now there's not so much you can do. We'll see, as Valtteri said, it's not going to change the world upside down tomorrow in the race. I think it's more an issue for quali where you're really pushing to the ultimate limit and, you go also significantly faster. So, I guess tomorrow should be fine - but for sure it will be a bumpy race. I hope all three of us do well tomorrow but I think the last thing we need is somebody tapping our shoulders after all the tapping we get through the corners around the track. So, yeah, we'll see what happens.