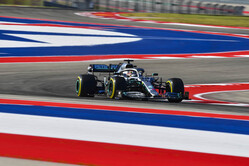 Drivers had at their disposal two sets of unmarked 2020 C4 soft compound tyres, to use during today only. Most drivers used these tyres in FP1, with slightly less running of these tyres seen in FP2, as teams concentrated on race preparation.

Despite the very cold conditions, similar to Barcelona pre-season testing, the lap times were comparable to the dry sessions last year. There were only a few cases of light graining seen, on both the current and 2020 compounds.

There was a high degree of track evolution in evidence, with the lap times at the end of the session in the afternoon considerably faster than those of the morning.

Degradation on the soft tyre also seems to require some pace management so far.

The weather is expected to warm up slightly over the course of the weekend, but not significantly: it will still be a cool weekend, so teams have to adapt to this.

The weather conditions and track evolution made it hard to get a sensible read on the performance difference between the compounds. However, so far we see around one second between soft and medium (a bit more than we expected), and roughly the same between medium and hard (in line with our expectations). There's not so much data on the hard though, so this gap is hard to calculate accurately.

Mario Isola: "The very low temperatures seen so far this week have come as quite a shock to many people, and of course they have an effect on tyre performance. It's in some ways a pity as we had hoped to give the drivers their first taste of the 2020 tyres in more representative weather, but obviously there's not much that we can do about it. On the positive side, there were only a few cases of light graining seen even in these extreme conditions - on the 2020 tyres and the current tyres - and the teams were still able to take away some useful information, on both new and used 2020 tyres, sometimes by doing back to back comparisons with the existing product. The relevance of this data is obviously compromised by the fact that it's a 2020 tyre on a 2019 car, which hasn't been optimised for this specification of tyre, but at least it allows the teams to gather some information in view of the final test of the year at Abu Dhabi. Apart from that, today consisted in carrying out the usual preparation work for qualifying and the race with different fuel loads, and in particular adapting the cars to these cold conditions. We experienced a very high degree of track evolution throughout the day that clearly influenced the lap times, but overall I'm actually quite surprised by how well the cars and tyres performed today in conditions that they really weren't designed for."