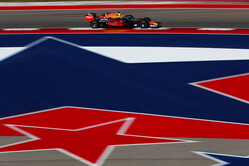 Ahead of today's sole practice session the air temperature is 18 degrees C, while the track temperature is 25.4 degrees. It is bright and sunny, and warmed than yesterday's opening session. However, a gusty wind continues to blow.

The big news, other than the fact that Perez will start from the pitlane tomorrow after failing to stop at the weighbridge when requested at the end of FP2, it that following complaints from almost all the drivers, the bumps at Turns 1 and 9 have been worked on in a bid to level them out.

Hamilton was quickest in yesterday's second session, and while much has been made of the fact that on his fastest lap he clearly benefitted from a tow from Kubica in S2, the fact is that this weekend is looking remarkably similar to what we witnessed in Mexico, with Ferrari and Verstappen looking good on qualifying pace, but recedes looking strong on the hard tyre.

Behind the usual suspects, Gasly was best of the rest, with Sainz, Stroll, Giovinazzi and the Renault duo also in the mix.

Norris heads down the pitlane along with Magnussen, and as the lights go green the pair head out into the sunshine.

As more drivers join them there's a mixture of all three compounds.

Asked for a radio check, Norris 'sings': "I'm moving up and down, side to side, like a rollercoaster".

Much like an FP1 session, the drivers complete one install lap and then pit.

While the Red Bull pair make an early appearance, the Ferrari and Mercedes duos are in no rush to head out.

Twelve minutes in and Grosjean is the first driver to head out for a second run.

Yesterday it was a headwind into Turn 12, today it's a tailwind.

A 36.579 from Grosjean finally kicks the session into life. However, moments later the yellows are waved as Leclerc grinds to a halt at Turn 19.

"There's something wrong with the engine," reports the youngster as the VSC is deployed. He climbs from the Ferrari, which has smoke rising from the airbox.

The VSC is withdrawn, and Perez and Vettel, who were both on track at the time of the VSC, continue.

Hamilton goes second with a 34.772, while teammate Bottas subsequently goes top with a 34.558.

Vettel retakes the top spot with a 34.441, the big guns on softs while the McLaren pair - in fourth and sixth - are on mediums.

While Verstappen heads out on softs, teammate Albon is on hards.

As he is starting from the back of the grid, Perez has taken the opportunity to take on a raft of new power unit components.

Vettel's time is subsequently deleted for running wide in Turn 19, something the German and his rivals will need to watch this afternoon.

At 'half-time', Albon, who has yet to post a time, heads out again on the softs.

In the Ferrari garage there is still smoke coming out of Leclerc's airbox.

Quickest in the first and final sectors, Verstappen goes top with a 34.186.

Shortly after, teammate Albon goes fifth with a 35.269, albeit over a second off the pace as Verstappen raises the bar with a 34.186.

Hulkenberg goes sixth with a 35.487, ahead of Gasly, Sainz, Magnussen and Ricciardo.

A 34.636 sees Albon improve to fourth, splitting the Mercedes pair, and now just 0.450s adrift of his teammate.

On fresh softs, as the qualifying sims get underway, Bottas goes quickest with a 33.904.

Despite a strong opening sector, Kvyat fails to maintain the pace and thereby remains 15th (36.090).

Curiously, Bottas is told that on his fast lap he triggered the track limits loop at Turn 19, even though he didn't exceed the limits.

Quickest in all three sectors, Vettel goes top with a 33.523, as former teammate Raikkonen complains that he was blocked by a Racing Point. Nonetheless, the Finn goes firth with 34.513.

At Ferrari, it appears the team is going to change the power unit in Leclerc's car.

As Grosjean improves to seventh, Sainz goes fifth with a 34.408, very impressive from the Spaniard.

Norris goes third with a 33.818, as McLaren continues to impress, a far cry from the disaster that was race day in Mexico.

Verstappen goes quickest with a 33.305, the Dutchman quickest in the first and final sectors... and on 5-lap old tyres.

Hamilton is clearly struggling however, the Briton 0.7s off Verstappen's pace.

A late improvement sees Ricciardo go tenth (34.774), just ahead of his Renault teammate.

Norris is told that the main place to find time is Turn 1. "Back of the braking a little bit, and use the track," he is told. "It's so bumpy on the entry I can't see," replies the Briton.

"It's not like yesterday," complains Grosjean, before reeling off the various corners where the car feels different.

PBs in the first and final sectors see Hamilton improve to fifth with a 33.923.