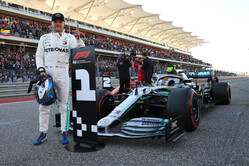 Since the first Grand Prix at the Circuit of the Americas, the race has never been won by a driver starting from outside the front row, and while this doesn't mean it can't be won from the second or third rows, it does suggest that this is a circuit where being on pole, or at least alongside, is important.

On the evidence thus far, having been quickest in two of the practice sessions, Max Verstappen is looking good, the Dutchman no doubt buoyed by his pole-grabbing performance seven days ago in Mexico.

Back then we wondered how he would fare once Ferrari and Mercedes turned the wick up, but in the end it was the stewards who rained on his parade, handing him a three-place grid drop for not slowing under the yellow flags that followed Valtteri Bottas' crash.

Other than Verstappen, Ferrari looks strong, or at least Sebastian Vettel does, Charles Leclerc sidelined in FP3 following an oil leak which necessitated an engine change during the break. Fitting an old engine however, the youngster escapes any penalties.

Mercedes has struggled a bit this weekend, but that doesn't mean we can write the Silver Arrows off, far from it, for in many ways this weekend is shaping up to be a repeat of Mexico.

The big surprise earlier was the performance of the McLaren pair, Lando Norris finishing a mighty impressive third and teammate Carlos Sainz seventh. However, speaking at the end of the session, Zak Brown was keen to play things down.

2018 winner, Kimi Raikkonen, was in the mix, as were the Toro Rossos, particularly Pierre Gasly, and Renaults, and, to a lesser degree, the Haas pair.

With an eye on the grid penalty handed out to Verstappen last week, this time around it is worth keeping an eye on track limits, particularly at Turn 19. A number of drivers have fallen foul of the electronic system thus far this weekend and have had their times deleted as a consequence. As the pressure builds in the final moments of each phase of today's session, this could prove to be an issue.

As could the bumps which over the course of the weekend have caused issues for both drivers and cars alike.

The lights go green and Kubica gets things underway, followed by his Williams teammate.

Leclerc is next out, his crew having done a great job of changing his engine during the break.

Kubica posts a benchmark of sorts, the Pole crossing the line at 38.302. Moments later, Russell eclipses his teammate with a 37.386.

Things get a little more serious as Leclerc posts 34.696, ahead of Raikkonen and Giovinazzi as more and more drivers head out, all of them on softs.

Verstappen stops the clock at 33.549, as Ricciardo goes sixth and Hulkenberg seventh.

Quickest in the final two sectors, Hamilton goes quickest overall with a 33.454.

Going quickest in S1, Leclerc subsequently struggles for grip and as a result the Ferrari driver aborts his second flying lap. He is currently seventh.

With 4:50 remaining, the Alfa pair along with Perez and the Williams duo comprise the drop zone, with Grosjean, Kvyat and Stroll hovering.

Despite the fact that it would take the mother of all shocks to see him fail to make the cut, pace-setter Hamilton is back on track at the final assault gets underway.

Leclerc is one of the many drivers either taking nothing for granted or seeking to climb up the order.

Hulkenberg improves to eighth, while Norris and Magnussen are on hot laps.

Magnussen goes sixth, while Giovinazzi demotes his own teammate, only to be dumped into the drop zone by Grosjean who makes it by the skin of his teeth.

Vettel is among the first out for Q2, followed by his Ferrari teammate. They are joined by the Mercedes pair, all four on the mediums.

Verstappen heads out, also sporting the yellow-banded rubber, while his teammate is on softs.

As they begin their first flying lap, Leclerc is quickest in S1.

After the first wave, Kvyat, Ricciardo, Stroll , Hulkenberg and Grosjean comprise the drop zone, with Magnussen and Norris hovering.

Asked if he can go faster, Leclerc responds: "Not with these tyres". Which sounds like the Ferrari driver, who is currently fifth, just ahead of his teammate, may switch to the softs.

The final assault gets underway, with Stroll leading the way, and the Mercedes pair head out on softs, as does Verstappen, while the Ferrari pair stick with the mediums.

Stroll has a poor opening sector and looks unlikely to improve, while Norris posts a PB.

Stroll improves in S2, while Norris maintains his strong pace.

Hamilton posts a PB in S1, as do Verstappen and Vettel.

Hamilton aborts his lap, while Verstappen is unhappy after an incident involving Hamilton and Kvyat in Turn 19, the Russian having has his lap time deleted in the process.

The stewards are to investigate.