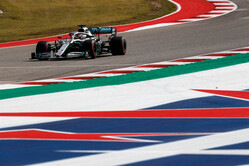 Mercedes driver Valtteri Bottas claimed pole position for the United States Grand Prix, also setting a new track record in the process. Bottas's pole time was set on the red soft compound tyre, but his best Q2 time was established on the yellow medium, which means that this is the tyre he will start the race on tomorrow. His team mate Lewis Hamilton, the two Ferraris of Sebastian Vettel and Charles Leclerc, plus the Red Bull of Max Verstappen will also start on the yellow tyre tomorrow.

Bottas received the Pirelli Pole Position Award from American legend Mario Andretti: the 1978 Formula 1 World Champion, who is a true hero to all racing fans both in the United States and abroad.

There's also a viable two-stopper, which is also competitive. It goes like this: use two sets of soft for 15 to 18 laps, then medium for 20 to 26 laps.

All four strategies detailed here could work well at the Circuit of the Americas, depending of course on the degradation rate of the soft tyre in particular. This will be influenced by weather and track conditions on race day: we saw at the last grand prix in Mexico the sort of difference that these can make.

Mario Isola: "Unusually, conditions in qualifying are unlikely to be completely representative of the race, as the grand prix takes place three hours earlier. Today's warmer conditions suited the tyre range better: the result being a new track record. With more rubber being laid down, we also saw a high degree of track evolution. The tactical battle has already begun with Mercedes, Ferrari and the Red Bull of Max Verstappen choosing to start the race on the medium tyre, ahead of those on the faster soft, which should make the first few laps interesting tomorrow. Theoretically, the quickest race strategy is a one-stop using soft and medium, but there's really not much in it. Finally, it was a huge honour for us to have Mario Andretti present the pole award here in America today: a genuine legend of our sport."