Bottas wins the race and Hamilton the title 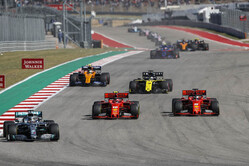 What a time to be alive.

Today we have King of the Getaway, Valtteri Bottas on pole, alongside a back in-form Sebastian Vettel.

That said, amidst speculation over various aspects of its recent performance, in the wake of a technical directive from the FIA related to fuel flow, the SF90 has been somewhat off the boil in terms of sheer pace this weekend.

And then we have Max Verstappen and Charles Leclerc, who have history, not forgetting Lewis Hamilton, who in recent weeks has been fairly vocal about his Dutch rival, and vice-versa.

Who needs celebrity razzmatazz when you've got five young (and not so young) chargers very much up for the fight.

Of course, Hamilton has nothing to prove, whatever the maths might say the title is already his, and deservedly so. Consequently, rather than take on Messrs Verstappen, Leclerc and Vettel, the Briton can afford to take it easy, enjoy the day out and almost cruise to the title, but that's not his style.

However, as we know from experience, it isn't only Turn 1 here that tends to be a magnet for incidents, for Turn 12, at the end of the back straight, also has a certain reputation.

With a question mark over the Ferrari's outright grunt, and Red Bull very much in the mix, today is likely to be about strategy, and as witnessed as recently as last week, Mercedes tends to rule in that department.

Against all odds, Hamilton made his hards last an inordinate number of laps last week - seemingly having learned a lesson from Suzuka - and it will be interesting to see if Mercedes tries to repeat its winning strategy again today.

Forget the title fight, such as it is, for there are other battles to be won here.

There is clearly growing needle between Hamilton and Verstappen, while at Ferrari Leclerc has a point to prove, and let's not forget Alex Albon seeking to impress Messrs Horner and Marko and thereby retain his seat.

Indeed, let's not forget that since transferring in from Toro Rosso, young Master Albon has scored 58 points to Verstappen's 39.

Another factor to consider, not just for the big guns but for everyone today, is track limits, with a number of drivers having had their times deleted over the previous two days after triggering the sensors at Turn 19, not least Hamilton and Vettel.

And let's not forget those dreaded bumps, which have proved problematic throughout the weekend for both drivers and cars, and could well play a part today as the urgency ramps up.

Indeed, in a further bid to prevent drivers taking liberties, a new kerb has been laid overnight at Turn 8 also.

Much like Hamilton has the title sewn-up, so too McLaren appears to have best of the rest in the bag.

That said, another woeful performance like Mexico would only allow the likes of Renault, Toro Rosso and Racing Point to gain ground.

Of course, Racing Point's cause isn't helped by Sergio Perez starting from the pitlane after the Mexican fell foul of the weighbridge rules.

As ever, the midfield battle should be fun, and while Alfa Romeo appears set to be running ahead of the Williams pair, Haas might benefit from home advantage as it seeks to turn its miserable season around.

Finally, using the softs for 19 to 22 laps and the hards for 34 to 37 laps constitutes the third-fastest strategy. But there's really very little to choose between any of them, according to Pirelli, so we could see a lot of different tactics in play.

There's also a viable two-stopper, which is also competitive, using two sets of softs for 15 to 18 laps, then mediums for 20 to 26 laps.

All four strategies could work well, depending on the degradation rate of the soft tyre in particular, which will be influenced by weather and track conditions - we saw in Mexico the sort of difference that these can make.

The Mercedes par, the Ferraris and Verstappen all start on the mediums.

In the previous seven Grands Prix here, the winner has never come from outside the front row, while perhaps Vettel can draw additional comfort from the fact that last year's winner - a certain Mr Raikkonen - started second.

Interestingly, both Ferrari drivers have a brand new set of softs available.

The pitlane opens, and as ever the drivers begin heading out.

As the national anthem is sung - not too well in our opinion - mechanics are working on the rear of Verstappen's car, the Dutchman citing a "cracked endplate".

Other than the Mercedes, Ferraris and Verstappen, Magnussen, Stroll, Grosjean, Giovinazzi, Russell, Kubica and Perez all start on mediums, while Hulkenberg and Kvyat are on hards. The rest, including Raikkonen, are on softs.

The field heads off on the warm-up lap, all getting away cleanly.

They're away! A great start from Bottas, Verstappen also, but both Ferraris are slow getting away. Indeed as they reach the top of the hill Verstappen is alongside Vettel, going around the outside of the German in Turn 1 and thereby having the inside line for Turn 2. Further behind, Albon and Sainz run wide, the pair touching as they jostle for position. Stroll subsequently going cross-country in Turn 3.

Following his poor getaway, Vettel continues to struggle and is easy prey for Hamilton and then his own teammate.

Vettel attempts to re-take the position, and draws alongside his teammate, they appear to touch with the front of the German's Ferrari jumping slightly.

To add to his woes, Vettel is subsequently passed by Norris, who passes Ricciardo and the Ferrari in successive corners.

Vettel is now under pressure from Gasly, the German wondering if he has damage even though he's not aware of hitting anything.

Albon and Sainz are under investigation for the first lap incident.

As Ricciardo shadows Norris, Vettel is tucked up behind the Renault.

The stewards announce that no further action is required in terms of that first lap clash involving Sainz and Albon.