Verstappen hits out at Hamilton 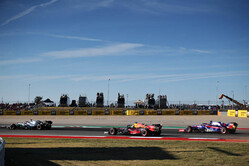 In the wake of their first lap encounter in Mexico, a move he described as being "torpedoed", Lewis Hamilton admitted that, due to his aggressive style, Max Verstappen is a driver to whom he usually gives extra space, a claim with which Sebastian Vettel concurred.

Told of the comments on arrival in Austin, the Dutch youngster described them as "silly", while admitting that it was good to know that he was clearly getting into his rivals' heads.

Q3 saw another tangle, as, in the last minute search for some clear track for his final run, Hamilton went wide in Turn 19, having previously overtaken Verstappen in Turn 16, causing issues for the Red Bull driver and Daniil Kvyat, who were running behind.

"I mean, everybody's just respecting each other at that point, just to start the lap. That's why it was such a close call."

"It's just a nothing," said Hamilton of the incident, which the stewards deemed as not needing investigation. "I was trying to keep temperature in my tyres, everyone was driving so slow.

"There are no rules or regulations that say you have to stay in single file," he added. "So I kept going and then he started to try and race me, which was fun."

Which should be "fun".