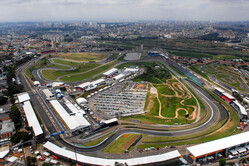 Though there is seemingly no money, no environmental or construction licences and no contract, Brazil's president, Jair Bolsonaro, is pushing ahead with his plans to take his country's round of the world championship away from Sao Paulo to Rio de Janeiro.

However, ahead of this weekend's Grand Prix, held at Interlagos, scene of some of his hero, Ayrton Senna's, greatest successes, world champion, Lewis Hamilton has poured cold water on the proposal.

"I'm a little old school, I love the Interlagos circuit," said the Briton, who famously won his first title in the final corner of the final lap at the legendary track.

"There is a lot of money that goes into building a new circuit," he continued. "We already have a historic circuit here, we don't need to cut any more rainforest down, do any more damage.

"That money could go to better causes here, it could go to the infrastructure of the cities, there is a lot of poverty still," he added. "If it was my money, I would put it in a better cause. Education is super key, for example."