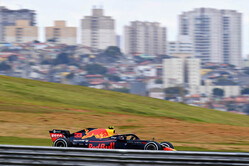 For the penultimate race of the season, Formula 1 remains in the American continent for the Brazilian Grand Prix, at the iconic Interlagos venue where so many stories from Formula 1 history have been written. This year, Pirelli takes the C1 as the White hard tyre, the C2 as the Yellow medium, and the C3 as the Red soft. This is the hardest possible combination of compounds, and a step harder from what was chosen for Brazil last year.

In 2018, the medium, soft and supersoft tyres were nominated. Despite a tyre nomination that is slower on paper this year, we're likely to see faster lap times - as has already been the case at several races this year - thanks to the continual evolution of the cars.

The harder tyre choice for this year in Brazil is designed to limit degradation, and so help drivers to push more during each stint.

The weather characteristics of Interlagos are among the most random of the year. In the past, we've seen some of the hottest track temperatures of the season, well in excess of 55 degrees centigrade - and also torrential rain.

The asphalt was entirely resurfaced in 2014 and it's now had plenty of time to mature: it was also cleaned thoroughly with high pressure water jets last year. As a result, it's about average when it comes to roughness and presents no particular challenges in terms of the actual surface.

Interlagos contains 15 corners within the second- shortest lap of the year, which means that there aren't many long corners, keeping the lateral demands quite low. The front-right tyre is worked the hardest on this anti-clockwise track.

A one-stopper was the winning strategy last year, with Lewis Hamilton going from supersoft to medium. But there was lots of variation, with three different tactical approaches from the three leading teams and five different strategies in the top six.

Mario Isola: "Interlagos is nearly always an exciting grand prix, where there's plenty going on: the compact track means that there's generally quite a lot of overtaking, with drivers also having to go frequently off the racing line. It's corner after corner, which keeps the tyres busy, and it's an old school track with not much run off, so mistakes are generally punished. Add in the variable weather and probability of safety cars as well, and this tends to make for an unpredictable weekend. You have to be prepared for everything: we don't know for sure yet which conditions we'll be facing, but our choice of the hardest tyres means that the teams will be able to push hard even if they are running - as is likely - a one-stop strategy."