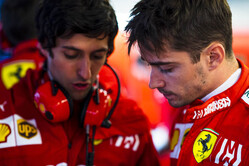 Amidst continued speculation over whether Ferrari's lack of pace in Austin was the result of the FIA's directive in terms of fuel flow, the Italian team has confirmed that Charles Leclerc will take a grid penalty in Brazil this weekend after his previous unit was damaged over the course of the United States GP weekend.

In qualifying and again on race day, the pace that the SF90s had enjoyed in previous outings was clearly missing, and while Sebastian Vettel was subsequently sidelined by a broken suspension, Leclerc finished a distant fourth, almost a minute behind race-winner Valtteri Bottas.

In the moments after the race, Max Verstappen claimed that Ferrari's poor showing was down to it having been caught cheating, a claim vehemently denied by the Italian outfit.

Ahead of this weekend's race at Interlagos, the penultimate round of the 2019 season, team boss, Mattia Binotto confirmed that Leclerc will take on a new power unit, and thereby incur a grid penalty.

"Charles will get a new power unit, as his was damaged on Saturday in Austin, which meant he had to use a previously used and less powerful version for the rest of the weekend," he said.

"Fitting a new PU means taking a grid-penalty, but we should be back to our normal performance level and show some fighting spirit to finish the season on a high note," he added.

"That will be important in order to confirm we are making progress with our car and to take some of that momentum into the winter work. I know that our drivers and the whole team are fully focused on that."