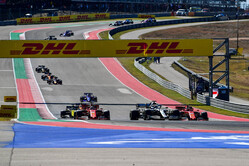 In the moments after the United States Grand Prix, asked about the poor performance from Ferrari, which saw Charles Leclerc finish fourth, 52s behind race-winner Valtteri Bottas, Max Verstappen told Dutch TV: "That's what happens when you stop cheating, of course...

While Sebastian Vettel missed out on pole by just twelve-thousandths of a second, it was noticeable that the power advantage enjoyed by the Italian team in recent races appeared to have faded.

Amidst speculation in recent weeks that the Italian team was exploiting a loophole in the regulations, at the beginning of the Austin weekend the FIA sent out a technical directive clarifying the rules on fuel-flow.

Consequently, when Ferrari's power advantage subsequently appeared to fade, the FIA's move having been prompted by an enquiry from Red Bull, it was widely felt that perhaps the Italian team’s progress had been stymied.

In the post-race press conference, Verstappen raised the issue again.

Asked about Ferrari's poor performance, and if he was surprised, Verstappen said: "Not surprised at all, after what came out. So that explains everything.

"What came out?" asked Bottas

"The piece of paper," said the Dutchman.

"I haven't seen it," insisted the Finn, who was then asked, if he was surprised. "Clearly!" he replied.

"Actually, I am," he added. "Because I haven't seen that piece of paper. I look forward to seeing it. But yeah, it was crazy. Since the beginning of the race they were far away - but Red Bull was really strong today, as they've been now everywhere lately. So... yep.

Mattia Binotto was quick to react to the comments.

"I read and I heard a lot of comments this weekend about a technical directive and the impact on our cars," he said. "I heard comments at the end of the race which I feel very disappointed by.

"These type of comments I feel are completely wrong," he continued. "It's not good for the sport and I think everybody should be a bit more cautious."

Asked if there had been any changes following the technical directive, he said: "Nothing at all."

"I think it's a joke to be completely honest," added Leclerc, when asked about Verstappen's comments. "He has no clue. He's not in the team.

"We know exactly what we are doing and I don't know why he's speaking, he doesn't know anything about us."

Claiming that his team hasn't even looked at the directive in detal, Binotto said: "Honestly, we will look through the technical directive, we have not done it this weekend in detail.

"We've seen, I think it's number 35 of the season," he added. "It's a process where teams may ask clarification to the FIA and the FIA is replying. Will it have more of an impact in the race or qualifying, I don't know. I am not able to answer you.

Referring to his team's poor performance, he said: "It's true that we were not gaining on the straight as much as in the past races, but true as well that I think we matched our competitors in cornering, at least in qualifying.

"The trade-off between grip-limited and power-limited has been moved this weekend as a test on our side," he added. "We were competitive in qualifying and now there is something in the race we need to understand and then see what's best for the next races in terms of the trade-off."

"The power unit is an incredibly complex piece of machinery," said Christian Horner, "both from a hardware and software perspective.

"The clarification we requested was standard stuff that goes backwards and forwards continually between the teams and the FIA. It's always good to get clarity before wasting effort.

"I think the technical directive was very clear. That's not to say anybody was doing anything, but if they were it would obviously be illegal."

"We just had a discussion about the data from the race and the speed trace looks totally different to the last few races," said Toto Wolff of the Ferraris. "But whether it's down to the technical directive or down to another issue, I honestly don't know as we can't look into what Ferrari has done."