Mercedes remaining in F1 "not a given" admits Wolff 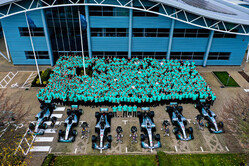 With none of the teams having yet signed up to race beyond 2020, it is understandable that there is speculation over whether one or two might take the opportunity to leave the sport at the end of next year.

In recent months speculation has centred on three teams, Haas, Renault and Mercedes.

Having openly criticised the fact that F1 is essentially two leagues, with those in the lower division having no genuine chance of promotion, his team's inexplicable loss of form this year is sure to give Gene Haas cause to think again. Indeed, many point to the fact that Romain Grosjean has been retained for 2020 as a sign that the American outfit is merely biding its time.

While the recruitment of Pat Fry and Dirk de Beer took many of those confident that Renault would quit (again) by surprise, Interim chief executive, Clotilde Delbos recently told analysts that Renault is examining all aspects of its business, including its participation in F1.

The German team has none of the issues Haas and Renault face, indeed it is its success, its almost total domination of the sport that is the problem.

Having recently secured its sixth title, heading into 2020 as odds-on favourite to add another, one has to wonder what more can the German team achieve. A seventh successive Constructors' Championship would beat Ferrari's best-ever run, and would surely be the ideal time to say 'job done, auf wiedersehen'.

Though Toto Wolff, who owns 30% of the team, is confident the team will continue in 2021, he admits that it is "not a given".

"Everything indicates that we will stay. But it's not a given," he told Motorsport.com. "We are in the middle of discussing the new Concorde Agreement. In connection with this - and independently of it - we are discussing the development of the automobile and its effects on sport.

"In which direction is the automotive world developing?" he continues. "In what form is Formula 1 relevant as an entertainment and technology platform? As a brand whose first car was a racing car, do we want to stay on this platform in the long term?

"There is the Ferrari model that says: 'We will do it forever. We build racing cars and we build road cars'. The other model is to say: 'We had a very successful run. There's nothing more to prove. We're doing something else now'. Both are absolutely plausible strategies."

In terms of the team having achieved all it needs to, he says: "If you do a survey today to see which Formula 1 teams are the most successful, most people will say Ferrari. That's simply because Ferrari has been at the forefront and competitive for fifty years.

"I think at a time when everything is so short-term, it's the sustainability of success that makes the strategy much more credible than fast in and out. Success can also fluctuate at times - it can also happen that you come third.

"Of course, as a brand used to success, you have to endure keeping your own expectations realistic and calibrating that you can't win every year. That's not easy. I have to start with myself: How can I endure that?"

Worryingly, at a time there are fears over whether Honda will remain in the sport, Wolff admits that should Mercedes decide to leave F1 it would almost certainly mean as an engine supplier also, a move that would come as a major blow to Racing Point, Williams and (from 2021) McLaren, not to mention F1 bosses.

"We have four teams that we supply, including ourselves," he says. "You can be only pregnant or not pregnant, not half pregnant. So either we participate in the platform or we do not."

Asked if the team leaving the sport would necessarily mean the engine division following suit, he said: "I don't think anyone would decide that. But if that were to happen, it would be a consequence."