Driver salaries should be included in budget cap says Brown 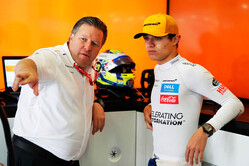 Anyone who has taken part in a Fantasy F1 game will be aware that, depending on your strategy, driver salaries will usually account for a significant portion of your budget.

Not so under the planned budget cap for 2021 however, when drivers salaries will be one of the many items exempt from the cap.

Indeed, as previously reported, hard as it is to believe, the unlimited areas of spending exceed the limited areas.

With court papers from the recent legal case involving Daniel Ricciardo revealing that the Australian is on a "fixed fee" of $55m for his two years at Renault, and Lewis Hamilton likely to be on double that, McLaren's, Zak Brown believes that driver salaries should be included in the cap.

"I think drivers should have been included in the budget cap, whatever that budget cap is," said Brown, according to Motorsport Week. "I think what that would do is it would force teams to make decisions on where they want to spend money.

"It wouldn't necessarily, if you felt driver made the biggest difference, keep paying your drivers what you're paying them today, but I think it would have put pressure on the teams to figure out where do you get your biggest value.

"It wouldn't have automatically reduced their salaries," he insists, "but it would have forced teams to make more decisions on where to spend their money."

Though he believes the cap should have been lower than the planned $175m (£135.8m), Brown feels that the cap is an acceptable compromise.

"The ideal figure was $150m plus fewer exclusions, now it's $175m plus more exclusions," he said.

"I think what was presented in Bahrain (2018) was a better financial model that would have produced the same race results, maybe even arguably better race results because it would concertina the field that much more," he added.

"For your shareholders, you like to provide them a return, and because we will run at the budget cap, had the budget been less, that would have provided a better return.

"But there's compromise, the guys spending a lot more obviously wanted it to be higher."